Sometimes you have to surrender to the subject. The London Royal Academy of Arts (RAA, acronym in English) is presenting the exhibition Spain and The Hispanic World from 21 January, a compilation of 150 of the works it has treasured for more than a century Hispanic Society of New York. The romantic vision of Spain that the American millionaire Archer M. Huntington fell in love with and to whose artistic heritage he dedicated an imposing neoclassical building in Upper Manhattan. The stereotype of a conquering and conquered country, Arabs and mestizos, luminous like Sorolla’s beaches and ascetic like El Greco’s rising martyrs. A culture that anticipated modernism in the lines of Velázquez and especially Goya, continuing folklore with La Familia del torero titano de Zuloaga or Los marineros de Castro Urdiales de Gutiérrez Solana.

It is a fragmented exhibition of an unchanging Spain, presenting even the modernism of Anglada Camarasa, with its falleras de burriana; that of Rusiñol with the Calvary of the Sagunto Cemetery; and that of Fortuny with his Arabs climbing a hill in an episode of the Spanish-Moroccan War.

The Hispanic Society’s collection, on display at the Prado Museum back in 2017, is the largest collection of Spanish and Hispanic art outside of Spain. It is difficult for any curator to attempt to suggest a new perspective or angle on a series of paintings and decorative arts that would respond to the desire for an idyllic, primitive, and rural society on the part of those who set out to acquire them. Huntington probably regretted the industrialization that changed the American landscape in the 19th century, but he sought refuge not in the slave-holding South or pioneering West but in rural Spain, which he discovered in a small bookshop in Liverpool before embarking on the first with his family Travel to the European continent.

“It is the vision of one man in particular, Archer Huntington, who collected and put together all these works because he fell in love with Spain as a young man and decided that the Metropolitan Museum of New York did not represent Spanish art correctly, so he decided to open their own museum as early as 1904,” explains Per Rumberg, one of the two curators who put together one of the RAA’s most important exhibitions of 2023. “We slightly changed the approach of what was the exhibition at the Prado. Approximately it stays in its two-thirds. We have removed some of the historical documents that were on display in Madrid to focus more on the artworks. We have not included the 19th-century series of portraits of most interest to the Spanish public. We have expressly dedicated a gallery to Goya, with an extra portrait [el de su amigo Pedro Mocarte]. And with three galleries, we have placed a focus on the artistic forms of expression of the Hispanic world of Latin America during the colonial period,” Rumberg sums up. 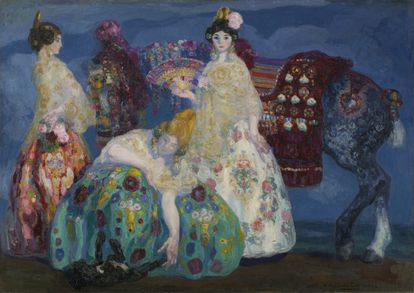 Surrounded by a large Hispanic community in the Washington Heights neighborhood of Manhattan, the Hispanic Society has made significant efforts in recent years to add material from Colonial America to its collection. The selection of the painting El Costeño by José Agustín Arrieta, the portrait of a young man of African descent in the Mexican city of Veracruz; or Las Castas: de Mestizo e India Produce Coyote, the painting by Juan Rodríguez Juárez that reflects the obsession with race, mixtures and purity of blood, shows that the curators wanted to convey a specific intention to the American part of the exhibition, in harmony with the coming to terms with the colonial past, which the British are promoting through debates in their own country.

“Of course, the colonial era is controversial, and we try to approach it from that perspective in our writing and interpretations. But it also shows a fusion of indigenous and Spanish traditions and the complexity that ultimately makes up the history of art in Spain,” admits Rumberg.

The treasures that forgive the subject

It is in the interest of the visitor to the RAA exhibition, particularly the Spanish visitor, to forget the general approach that is being proposed to them and focus on the opportunity to envision individual masterpieces. Goya’s full-length portrait of the Duchess of Alba alone is worth a trip to Picadilly Street. Many years after the death of María Teresa de Silva, the man from Fuendetodos kept in his own studio the portrait of the Spanish aristocrat in her black Maya costume, that commitment to being close to the people, which was repeated decades later for the third time, the Alba, the bore the title of Duchess. 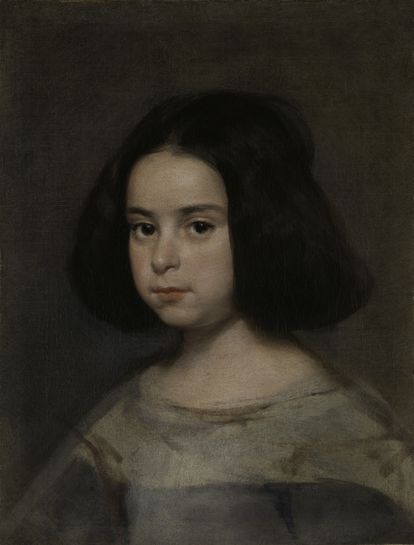 El Greco’s Penitent Saint Jerónimo or Zurbarán’s Saint Emerentiana serve to represent the Spain steeped in religiosity and at the same time so grandiose and solemn that many Anglo-Saxons still dream of. And the children scrambling along the luminous shores of the Mediterranean, or the girls dressing in Sorolla’s canvases after a swim in the sea, are still the Levant that millions of Englishmen yearn for – and swarm with – every summer.

The final surprise of the exhibition is a plethora of themes spread over several meters. For the first time you can see the sketch that the Valencian painter made with watercolors on brown paper, before starting work on the magnificent work commissioned by Huntington: Visions of Spain (Vision of Spain), the fourteen large panels with several of the regions of Spain. Fishermen, peasants, bandits, falleras and gypsies, all dressed in local folk costumes, beneath the majesty of cathedrals or daily life in granaries and mud huts.

As with many exhibitions, the path leads to the museum shop, where a table with legumes from León El Maragato, cans of tuna in olive oil and sardines, bags of Bomba rice – a must for every paella – await the visitor. , Jars of saffron, dried and sweet peppers by Doña Jimena. Everything between bowls and clay jugs. A portion and a half of Spanish on Piccadilly Street.