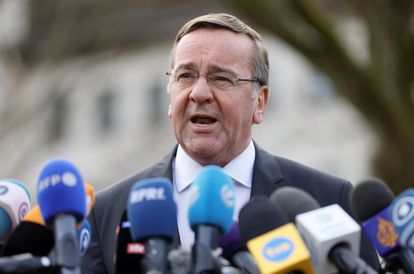 German Defense Minister Boris Pistorius during a press conference this Friday at the Ramstein military base (Germany). RONALD WITTEK (EFE)

Berlin needs more time. At the moment, its modern Leopard tanks will not fight on the territory of Ukraine. The federal government remains stubborn and will not give in to the pressure that has been going on for weeks to give the green light for the deployment of its powerful tanks to Kyiv. According to his new defense minister, Boris Pistorius, there is still no unanimous opinion among the Allies on the use of western heavy tanks. The expectations raised at this Friday’s meeting at Ramstein Air Force Base led to the maintenance of the refusal, but with nuances. Germany is not closing the door on a future change of opinion, but is asking its partners to form an international coalition in order to take the step.

Meanwhile, the Bundeswehr will not wait idly for this agreement, as Pistorius explained in Ramstein. The government intends to take stock of their leopards to know exactly what condition they are in and how many they might send to Ukraine. “We’re just preparing for the event,” he said.

Berlin plays a key role in sending modern main battle tanks to Kyiv, as Germany is the manufacturer of the Leopard, the model that many European partners have in their arsenals and is favored by the Ukrainian army at this stage of the war. Federal Chancellor Olaf Scholz has it in his hands to make the wishes of President Volodimir Zelenski come true, who again campaigned for a positive decision this Friday. No other country can supply its leopards without German approval, even if it has them and is willing to hand them over, as Poland and the Baltics have announced.

The Contact Group for Ukraine promised to continue to support Kyiv with the necessary weapons and training, but did not announce any further specific offers. Just hours earlier, a group of nine NATO member nations — Estonia, the United Kingdom, Poland, Latvia, Lithuania, Denmark, the Czech Republic, the Netherlands and Slovakia — pledged to make “unprecedented” arms deliveries. They stated that they will provide the Kiev army with tanks, heavy artillery, air defense, ammunition and infantry vehicles. The keyword in the statement, which was signed after a meeting at the military base in Tapa (Estonia), is “main battle tanks”. These are the capitals that are in favor of sending Leopards or other equivalent armored vehicles (such as the British Challenger, of which London Kyiv has pledged 12 units) and which with their declaration wanted to put pressure on Germany before the Ramstein date. Obviously it had no effect.

Polish Defense Minister Mariusz Blaszczak confirmed in Ramstein that representatives of the 30 NATO countries and 20 other allies could not reach an agreement, but he was optimistic. “There is hope because the defense ministers of 15 countries addressed the issue on the sidelines of the conference. I am convinced that in the end we will be able to form a coalition [para enviar tanques de manera conjunta]”, he showed.

Not everyone in his government had such kind words for Germany. More in line with recent statements by the Polish leadership, Foreign Minister Zbigniew Rau complained on his Twitter account: “Arming Ukraine to ward off Russian aggression is not a decision-making exercise. Really Ukrainian blood is being spilled. That’s the price of indecisiveness in Leopard deliveries. We must act now.” Warsaw is undoubtedly the ally that has put the most pressure on Berlin, even hinting that it will send its Leopards without permission.

Pistorius’ intervention was defensive. He emphasized that Germany is not the only country that prefers to act cautiously in view of the risk of escalation. “There are good reasons to deliver [los tanques] and also not to deliver, and given the current situation with a war that has lasted almost a year, the advantages and disadvantages must be carefully weighed,” he said. He did not go into the reasons for this and against it, but Scholz’s fear that It is well known that Russian President Vladimir Putin could feel attacked by the NATO leopards, or he could use this as a pretext for escalation.”The idea that there is a close coalition of countries and that Germany is preventing it is wrong,” stressed the new minister, who had just been sworn in before the German Bundestag the day before.

Washington came to Germany’s aid and also denied that Scholz had made supply of the Leopard conditional on the United States sending its equivalent main battle tank, the Abrams. “We can all do more” was the only sentence from US Secretary of State Lloyd Austin that could be interpreted as criticism of Berlin. In general, his speech was one of full support for Germany and the efforts it is making to send aid to Ukraine. “It’s a reliable partner,” he emphasized.

Military aid to Kyiv does not depend only on the delivery of a specific type of weapon, Austin stressed, referring to the German Leopards, the real protagonists of the event, although in fact the allies discussed other issues: how to continue the transfer of west aid before the start of the Russian offensive, which is expected in the spring. “We have a window of opportunity until then. It wasn’t that long ago,” he warned.

NATO Secretary General Jens Stoltenberg, who is attending the meeting of the Ukraine contact group, the so-called Ramstein format, insisted on this idea. He said it was “urgent” to increase support for Kyiv so that it could retake the occupied territory before the announced new Russian offensives take place.