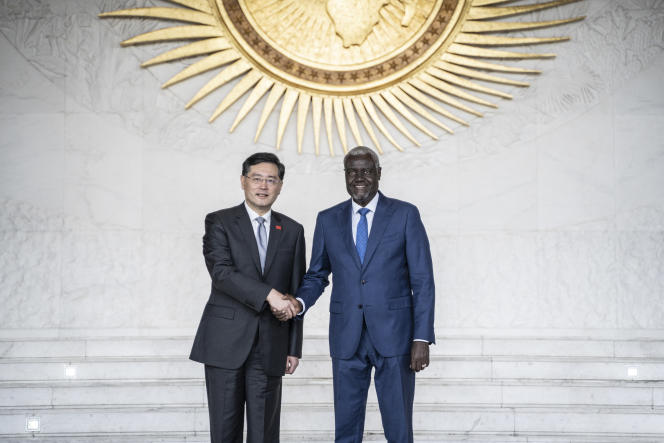 Like all his predecessors since 1991, China’s new Foreign Minister Qin Gang began the year with a trip to Africa. For a week, from January 9 to 16, the man who was China’s ambassador to the United States until the end of December visited five African countries: Ethiopia, Gabon, Angola, Benin and Egypt. While no spectacular announcement was made during this trip, it helped strengthen China-Africa ties both economically and diplomatically.

In Ethiopia, Qin Gang inaugurated the new headquarters of the African Union Center for Disease Control (Africa CDC), funded and built by China, as promised by Beijing at the 2018 China-Africa Summit. China had already built the headquarters of the African Union (AU) in Addis Ababa and is preparing to set up the Economic Community of West African States (ECOWAS) in Nigeria. Qin Gang said Beijing wanted the AU to attend the G20, “a symbolic but wise gesture,” according to Hong Kong-based researcher Jean-Pierre Cabestan. Getting a seat in the G20 is a strong aspiration for Africans.

On the other hand, the minister remained very cautious about the situation in Ethiopia after the fragile peace deal struck in November between the government of Prime Minister Abiy Ahmed and the insurgents of the Tigray People’s Liberation Front (TPLF). China had appointed a special envoy for the Horn of Africa, but he apparently played no role in the negotiations. More than 400 Chinese companies are present in the country, and Qin Gang recalled that Beijing wanted Ethiopia to “take effective measures” to ensure the security of its nationals.

While Ethiopia’s debt to China would total more than $13 billion, according to a study by Boston University’s Global Development Policy Center, and Ethiopia announced plans to renegotiate its foreign debt in 2021, the envoy from Beijing stuck to the issue evasive. In a meeting with Moussa Faki Mahamat, chairman of the AU Commission, Qin Gang denied there was a debt trap. “Africa’s debt problem is fundamentally a development issue,” he said.

In a sign of competition between the great powers of the Horn of Africa, Qin Gang had scarcely left Addis Ababa when French and German Foreign Ministers Catherine Colonna and Annalena Baerbock paid an official visit there on January 12-13.

You still have 45.03% of this article to read. The following is for subscribers only.