For carless people living in remote areas, opening a nearby dollar store can be a game changer, reducing the time — and money — needed to travel and shop for groceries.

But while they’re closer and cheaper, researchers at Tufts University warn shoppers to beware of the frozen ready meals, instant noodle tubs and fudge-and-marshmallow cookies that fill their shelves.

As dollar stores have doubled their share of the grocery market in rural America in the past decade, their wares are driving up rates of obesity, diabetes, heart disease and other health problems.

“More than ever, Americans are relying on dollar stores to buy an increasing portion of their groceries — particularly in rural areas,” Tufts nutritionist Sean Cash told .

“The combination of convenience and low prices is obviously attractive, but there are legitimate concerns about what this means for diet quality.”

Discount stores, including chains like Dollar General and Dollar Tree, proved resilient during tough times for brick-and-mortar retail and expanded their presence in the US – particularly in rural areas and the South.

University of Georgia geographer Jerry Shannon has charted their rise, which defied the decline of other chains after the 2007-8 financial crisis and when runaway inflation last year left millions of Americans scrambling for bargains.

The discount stores thrive in outlying areas that are too sparsely populated to attract other large chain retailers, and often pop up in run-down backcountry lots between Walmart and other large supercenters.

Though they sell everything from greeting cards to cleaning products, Tufts researchers say they’re increasingly being used for grocery shopping — and have doubled their market share in the rural grocery market since 2008. 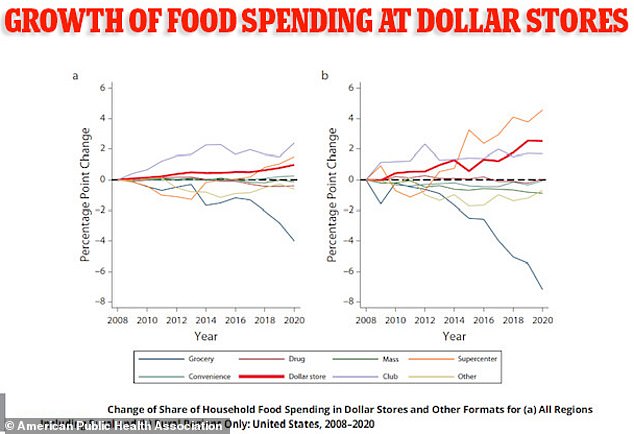 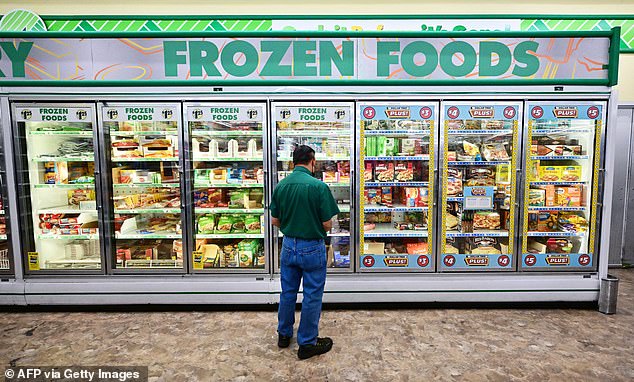 A man shops for frozen food at a dollar store in Alhambra, California, last August as cost-conscious shoppers hunted for bargains amid runaway inflation 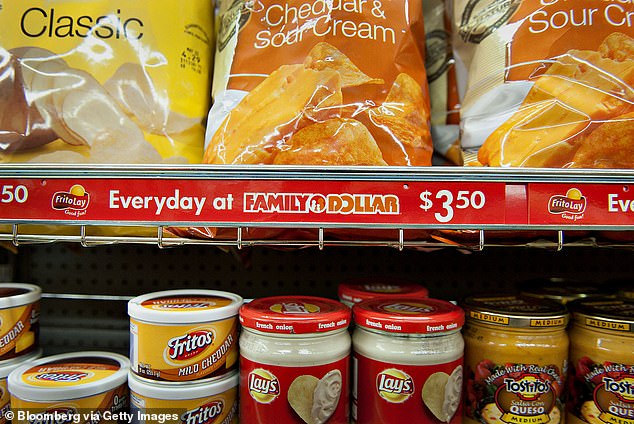 Items for sale at a Family Dollar in Sterling, Illinois, which are primarily nonperishable, highly processed foods

Would you like more or less dollar stores in your neighborhood?

In poor and rural areas, shoppers now spend more than 5 percent of their grocery budgets at dollar stores, a Tufts study of 50,000 households found this week.

In rural areas, much of the South, and in black households, this proportion rises to 12 percent.

For remote families, the boon of a nearby store must be weighed against the items on offer that are “heavily biased toward long-life, heavily processed foods with a severely limited supply of produce or other fresh items,” Cash said.

Cities and counties across the US have imposed restrictions to prevent new dollar stores from opening, often blaming them for exacerbating so-called “food deserts,” where poor people struggle to shop for healthy foods. 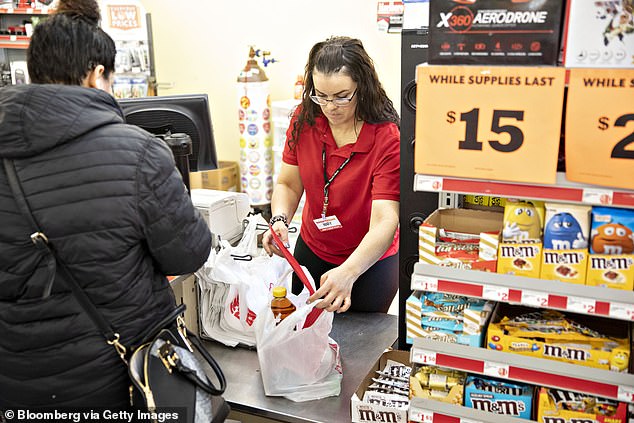 An employee bags a customer’s groceries at a Family Dollar store in Chicago, Illinois, where discount stores are expanding their presence 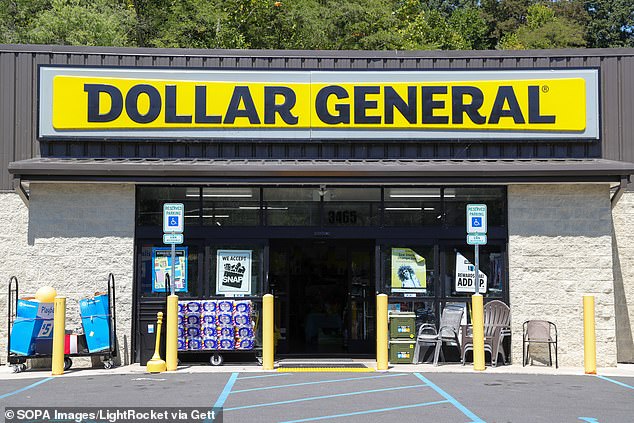 Merchandise is displayed at the entrance of a Dollar General Store near Bloomsburg, Pennsylvania

WHAT ARE ULTRA-PROCESSED FOODS?

Ultra-processed foods are high in added fat, sugar and salt, low in protein and fiber, and contain artificial colors, sweeteners and preservatives.

The term includes foods that contain ingredients that a person wouldn’t add when cooking at home — like chemicals, colorings, and preservatives.

Ready meals, ice cream, sausage, fried chicken and ketchup are some of the most popular examples.

They differ from processed foods, which are processed to make them last longer or to improve their taste, such as: B. sausages, cheese and fresh bread.

Ultra-processed foods such as sausages, cereals, crackers, and carbonated drinks are formulations composed mostly or entirely of substances derived from foods and additives.

They contain little or no unprocessed or minimally processed foods like fruits, vegetables, seeds, and eggs.

The foods are usually packed with sugars, oils, fats and salt, as well as additives such as preservatives, antioxidants and stabilizers.

Highly processed foods are often presented as ready-to-eat, taste good and are cheap.

The shops counter that they are cheap and serve people who would otherwise have to travel many miles to shop. They are now expanding their range of fresher, healthier products.

They are typically high in fat, carbs, salt and sugar and low in fiber in protein and topped off with a variety of artificial ingredients.

While scientists are unsure of the exact long-term effects of each chemical in processed foods, repeated studies have linked them to higher rates of obesity, cancer, heart disease, and other potentially devastating conditions.

Tufts researchers found last year that men who ate a lot of highly processed foods had a 29 percent increased risk of colon cancer.

The Alzheimer’s Association warns of data from Brazil showing that men who got the majority of their calories from these foods experienced a 25 percent increase in rates of cognitive decline.

Dollar store shoppers may turn to fruit juice as a healthy option — but beware.

Even though it’s 100 percent natural with no additives, pure fruit juice isn’t considered healthy because it’s highly concentrated in sugars, which can lead to diabetes, high blood pressure, and heart problems.

Experts say a simple rule of thumb in most cases is to stick to snacks with fewer than five ingredients.

A short list of ingredients indicates foods that are natural, contain few additives and have very little processing, nutritionists told .

Cash and Wenhui Feng, co-authors of his report, said they had started work on another study to compare dollar store dining with other types of outlets. 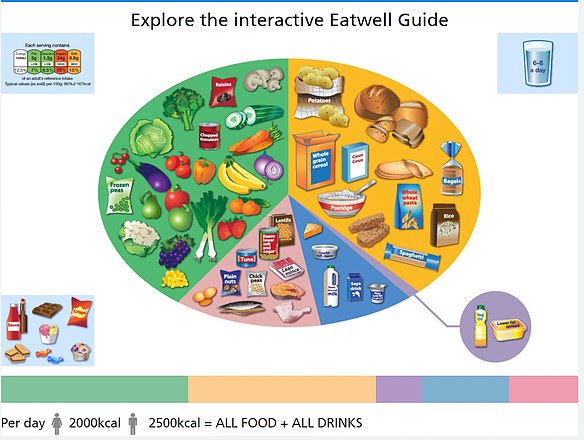 Meals should be based on potatoes, bread, rice, pasta or other starchy carbohydrates, ideally whole grain, according to the British Health Service

• Base meals based on potatoes, bread, rice, pasta or other starchy carbohydrates, ideally whole grains

• 30 grams of fiber per day: This equates to eating all of the following: 5 servings of fruit and vegetables, 2 whole wheat biscuits, 2 thick slices of whole wheat bread, and 1 large baked potato with its skin on

• Have some dairy products or dairy alternatives (like soy drinks) and choose lower-fat, lower-sugar options

• Eat some beans, legumes, fish, eggs, meat and other proteins (including 2 servings of fish per week, one of which should be oily)

• Choose unsaturated oils and spreads and consume them in small amounts