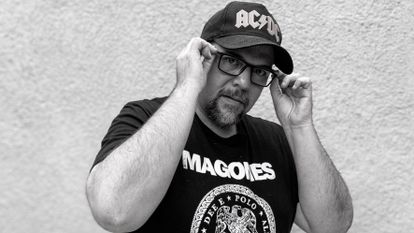 Part of me, dear reader, hesitated to write this newsletter.

The same, and you don’t know it, but in the literary milieu, as in so many others in the cultural field, there is a suspicion of the impartiality with which an author can judge the books of a friend – or several – and, worse, of one or two friends of those you can count on the fingers of your hand.

For this reason, since I’m about to talk about The Invincible Armada – although not only, as you will see as you read on – Antonio Ortuño’s latest novel, I recommend that if you decide to distrust me and mine Judgment – verily I have precluded talking about many friends’ books here because I understand that they are more friends than writers, just as I have been talking about writers who happily would never become my friends – stop it at this point and wait for our next installment.

I’ve been reading Ortuño’s books for almost twenty years, ever since El buscador de cabezas, his dazzling first novel – the number of print runs he’s had in a world like today speaks for some of his success, albeit Legion success much more speaks of the loyal readers it has and the numerous works it has inspired or influenced – even works as unique and diverse as Human Resources, Ánima, La Fila India, México and Olinka: I have, then witnessing how a narrator who possessed a natural and unbridled talent for telling a story simply by sitting at the keyboard, leaving no room to breathe, that is, grabbing the reader by the neck, gradually transformed into one who Book after book, his own talent took control and moderated it until, without letting go of his reader’s neck, he was also grasping his guts with that other hand that was gradually slipping out of the realm of speed and therefore could start kneading other things – c Oddly enough, in the case of Luis Muñoz Oliveira, such a friend of mine but also a writer like Ortuño, this matter, that of the hands, can be analyzed in reverse: instead of freeing one, Oliveira had to use both for his work. Instead of writing with one while the other was in a different space or time, write with both.

Overall, a work, especially if it is a serious work, should be a sum of decantations and another of amplifications. In this sense, Ortuño, always aware of his gift for narrative tempo, matured from Ánima, a novel that forced him to fork rhythms, but also from Mexico, a work that made him discover that a narrative can not only have tributaries , but in itself could already be a swell, struggling with its own talent, which therefore had to serve not only a general rhythm, but also the various particular rhythms that inhabit a book, including when playing with the neck of his readers: now I’ll let you breathe, now not – that’s what I mean by the decantations. But I was also talking about extensions, by which I meant something else: Paradoxically, after Ortuño freed himself from the slavery of breakneck speed, Ortuño began to enrich his literature with those other subjects for which he initially had no hands – in the case of Oliveira’s decantation was that of prose, which in his first books was far from the strength of the themes, but which in his latest novel, perhaps because the pandemic allowed him to focus entirely on it, reaches a brilliance that deserves the level of the essential, while the reinforcement is the other: the ideas that have always been fundamental in the author’s work, finally in Las marcas del agua, are there to be discovered, not to show off ; They don’t show, they suggest.

These things, these enrichments that begin to emerge from Ortuño’s second book, that is, from Human Resources, but which are evident in novels like La fila india and Olinka, as well as in his short story books – the short distance allows him to do it, right from the start to be in possession of all the tools a writer needs, since the narrative pace was little more than a moment or a situation – it is trial and error, the kneading of literature as if it were material, which is gradually becoming free hand and which leads to a dazzling refinement of form – bottom line, I hadn’t said it, but I’m saying it now, was always beautifully resolved in the Guadalajara writer’s books, as he was always clear, he, that the story , which he has to tell, is his almighty God, and he was consistent with this idea, as he was with this other one: misfortune does not exist and cannot exist, misfortune ck or discouragement, if not humor too, ah In Oliveira and Las marcas del agua, this enrichment, in addition to the question of language as material, would be the fact that the stories that mark the story, instead of accompanying each other, they mix: On the one hand fits, on the other hand, that’s clear, improves—.

The conjunction and this unique theme

That’s how it came about, that’s how we came about, dear reader, that’s how Antonio Ortuño actually came to La Armada Invincible, twenty years after his first book and a little less than his first readers who discovered it: before us, now, one down to the essence decanted work, almost to the balsamic reduction of the world, which would have earned three Michelin stars, a master class in narrative tempos and varied rhythms, which on top of that creates tension in form and substance; Not for nothing, while we are told the story of some mid-forties in an existential, economic and love crisis who decide to re-form the youth metal band, we read a framework of harmony and diverse melodies, one piece, well. replete with requintos – just as before Oliveira’s work, which hitherto had delighted us with requintos, we suddenly find ourselves before a piece, a symphony that plunges us into a journey of several centuries, beginning with the first Jews arriving in Mexico and the Put an end to drug trafficking and sexual violence.

A work made by Ortuño, decanted but also enriched to the limit, and here I speak literally, not just metaphorically: to the contours of its form, that is: in The Invincible Armada, while we witness the emptiness that besieges adulthood, to the overheating of an unfulfilled love, to the double failure of desires – if they are dreams and memories – and loss in this maze from which they cannot escape and which we know as friendship, language flourishes more vividly than ever, Architecture, for example, is a kaleidoscope of all his earlier novels – Oliveira for his part, and here I speak metaphorically, not just literally, what has enriched is the heart beating in the form.

For this reason, I dare to say that The Invincible Armada is not only exceptional, but Antonio Ortuño’s best novel – just like Las marcas del agua is Oliveira’s best novel – and that I also do it in this different way: The Invincible Armada is my friend Ortuño’s best book. And there’s one last thing, to top it off: It’s the book he always brought in with him.

We all know that writers, in addition to the books that result from their interaction with the world, write once, at most twice, the books that get stuck in their stomachs.

What only a friend knows is which of his books is this book. That’s why I decided to write this newsletter: to let you know that this is the book that Ortuño brought with him.