The way President Joe Biden smiles blithely and laughs in the face of America’s reporters, you’d think he doesn’t respect them. But no, that can’t be.

His is the White House, which spoke of “deep respect for the role of a free and independent press in our democracy” on the first day of government.

As Biden sat next to the Dutch prime minister in the Oval Office on Tuesday, reporters peppered him with questions about his classified documents scandal, and as always, the boss pursed his lips, shrugged at his foreign visitor, and giggled if those journalists only would be troublesome children.

It’s a habit for him – insulting the American media in front of foreign leaders.

“I wouldn’t bother to answer,” he was caught over a hot microphone in September while telling the President of the Philippines.

When British Prime Minister Boris Johnson visited the White House last year, he asked himself questions. Biden just sat there, as he does, with his arms crossed, hands clasped, or on his chin.

“They are among the only media outlets in the world that do this. Serious. Seriously,” he said jovially to the guests in October.

No, they’re not… seriously.

Biden wants America to see a joke among journalists. They’re not a threat to him – he just has his staff escort them out of the room.

The way President Joe Biden smiles blithely and laughs in the face of America’s reporters, you’d think he doesn’t respect them. But no, that can’t be. 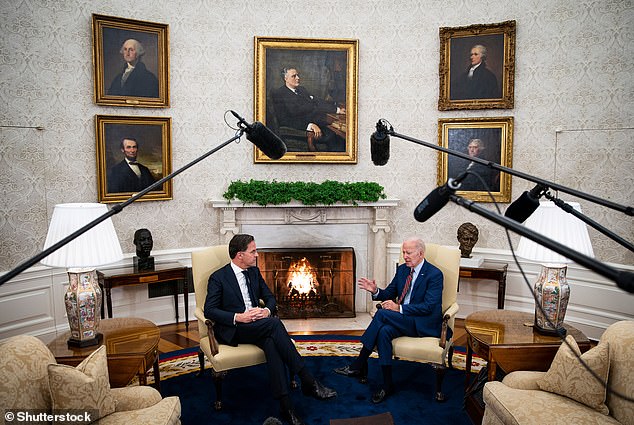 As Biden sat next to the Dutch prime minister (above left) in the Oval Office on Tuesday, the boss pursed his lips, shrugged at his foreign visitor and giggled like those journalists were just annoying kids.

Cynically, he’s onto something. Unfortunately, and not entirely unfairly, the media in America enjoys about as much trust as a used car salesman with a face tattoo.

But Biden’s act is just a thin veil. The truth is that the reporters come to him because he can’t take the heat. He’s afraid to open his mouth.

When he tried to provide an answer about his abuse of America’s secrets by keeping them in his garage, he made it worse.

“By the way, my Corvette is in a locked garage, okay? So it’s not like they’re sitting out on the street,” he said.

You can imagine his staff slapping their palms across their faces. And there’s something else: Biden’s skin is about the thickness of cigarette paper.

Remember, this is the guy who desperately grabbed Obama’s shoulder and begged for attention when everyone else was crowding around the former president. He has frequently snapped at the press, most often referring to them with a derisive “You people…”.

A year ago, on another hot mic, Biden was caught calling Fox News’ Peter Doocy “a stupid son of a bitch,” and he has called NBC News’ Kelly O’Donnell a “neckache.”

In October, he pressed his lack of campaign appearances and the implication that the election candidates didn’t want to appear with him, whining, “That’s not true, there were 15 of them, earl, kid, earl”. female reporter.

When asked what limits he would place on abortion, instead of giving a coherent answer, he only stammered: “It’s Roe v Wade. Read it man, you’re getting educated.’

For as long as television cameras have existed, Presidents have had playful, snippy, even argumentative repartees with those they cover.

We all remember Donald Trump being pilloried for calling the media an “enemy of the American people,” but at least he answered their questions. So why does quirky Grandpa Joe get a pass for his mocking approach to the men and women tasked with keeping the American people informed? 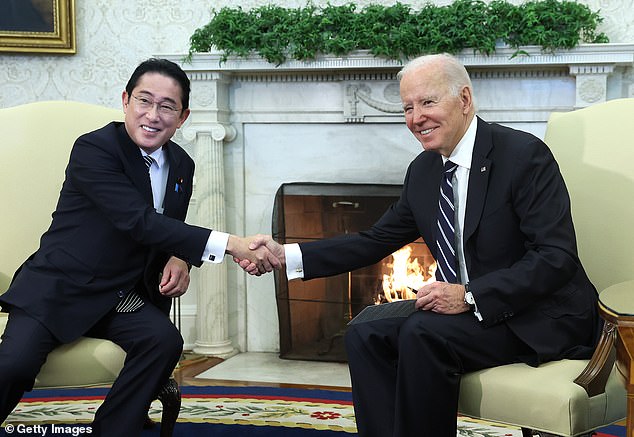 But Biden’s act is just a thin veil. The truth is that the reporters come to him because he can’t take the heat. He’s afraid to open his mouth. (Top) Biden and Japanese Prime Minister Kishida Fumio shake hands at the White House on Jan. 13, 2023 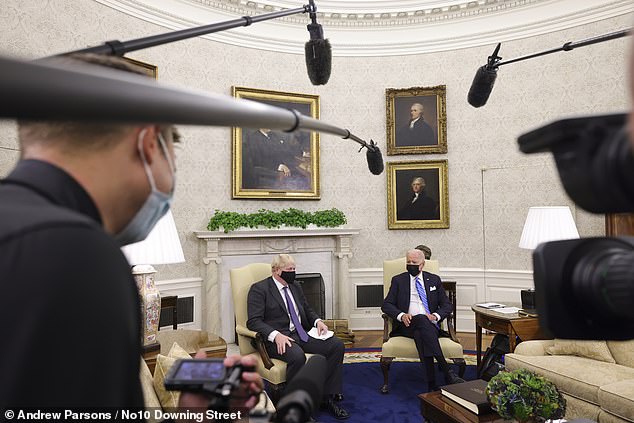 When British Prime Minister Boris Johnson (above left) visited the White House last year, he asked himself questions. Biden just sat there, as he does, with his arms crossed, hands clasped, or on his chin.

Trump’s ire was generally directed at the news media as an institution, not at individual reporters on a personal level, in fact he seems oddly on good terms with some of his harshest critics like Maggie Haberman of The New York Times and New York magazine’s Olivia Nuzzi.

When Biden claps back at those who pester him, it’s not about the institution of journalism, it’s outrage that these stubborn practitioners of Q and A have the nerve to even question him.

He is mean. Mean.

In Biden’s mindset, any question that challenges him, and let’s face it, apart from Doocy they’re rare, must either be the result of a reporter acting in bad faith or being just plain stupid.

That’s a very dangerous attitude for the most powerful man in the country. It may give a glimpse of why his government never backs down, never adapts to the facts on the ground, on almost everything from the border to the economy to energy policy and everything else.

That attitude of unconcerned disdain has never been more galling than it is now as Biden faces legitimate questions about the gravest scandal of his career. His lawyers all but admitted he broke the law, but Joe feels these lightning-fast young reporters should just keep quiet while a special counsel investigates what happened in a dark corner of the Justice Department.

It doesn’t work that way, man. In fact, if CBS News hadn’t broken the classified documents story, Biden would have been happy to keep Americans completely in the dark about it, as he had done for weeks. 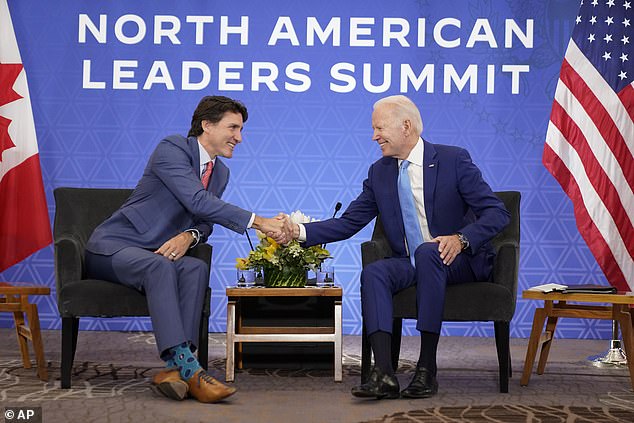 That attitude of unconcerned disdain has never been more galling than it is now as Biden faces legitimate questions about the gravest scandal of his career. (Above) President Joe Biden meets with Canadian Prime Minister Justin Trudeau on January 10, 2023 in Mexico City

Now reporters, who in the past have humbly borne the brunt of Biden’s wickedness just to continue their benevolent reporting, have been visibly and audibly frustrated at having been lied to since the beginning of this scandal.

On Friday, Biden sent his hapless press secretary, Karine Jean-Pierre, into the briefing room to relay inaccurate and incomplete information about how many documents had been found. She now admits the White House didn’t even bother to update her, she didn’t know the facts.

Biden cannot sit out this secret documents scandal in his basement like he did in the 2020 presidential election. Covid can’t protect him from fierce questions this time.

People deserve better than Biden’s snide and self-pitying antics with the press. They deserve a president who understands that he is not an infallible pope, but a politician with a responsibility to answer difficult questions.

And for heaven’s sake wipe that smug grin off your face.