The mythical Laurel Canyon scene had David Crosby, born in Santa Barbara and who died this Thursday, as a major agitator. It was the egg before the chicken or vice versa. He was the musician who, with less talent than others of his generation like Roger McGuinn, Neil Young, Joni Mitchell or Stephen Stills, knew how to be the glue for all those ragged people with groundbreaking visions and a hunger for experience to be the pop barracks in the sunny California, right in the hilly neighborhood of Laurel Canyon, the Olympus of the longhair and Hootenannies.

Hootennannies – small gatherings of folk singers with acoustic guitars – have been held in Los Angeles since the end of World War II. By the late 1950s, however, the scattered gatherings were merging into the clubs and coffeehouses that began to grow west of old Hollywood. Of particular importance were the Café Unicorn, which opened on Sunset Boulevard in 1957, and above all the Club Troubador, which moved from the Sunset Strip to Santa Monica in 1961 and brought the more commercially minded folk group with it. Among all those peacocks ready to shine just like the stars of new Hollywood, one stood out as cocky and dogmatic: David Crosby.

Crosby was the man who was always there, a regular of this burgeoning tribe with its chatter and knick-knacks of martial folklore, or as journalist Barney Hoskyns described him in the important book Hotel California. Singer-songwriters and coke-heavy cowboys in Laurel Canyon (Contra), the “impish-minded lewd teddy bear who sang plaintive protest songs in a nod to Woody Guthrie.” A guy who knew everyone and everyone knew him or wanted to know him. If the Troubador, as the great catalyst club of this opening scene, always had success in mind, so did Crosby, his great master of ceremonies. 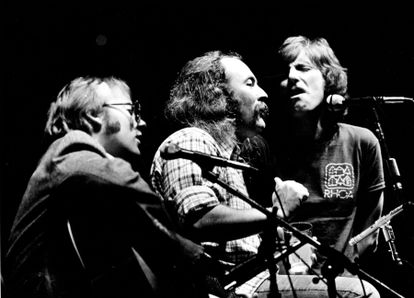 He was the glue, a true achiever, and the guy who presided over the best hootennies. His gaze turned to commercial success, but also to the cascade of hedonism that erupted in the warmth of sunny, free-thinking New Hollywood. He drank everything, got involved with everything, and hunted everyone, even though he was ashamed of his plump physique compared to the rest of the hippies. Dallas Taylor, the drummer who played with Crosby, Stills & Nash and various bands of the time, affirmed that he and Keith Richards became fans of the Jaco in half Hollywood. Eve Babitz, the best chronicler of this wild and partying Hollywood, who died last year, said walking into Troubador “you could smell the semen off the street” because of all the sex and drugs waiting inside. . Crosby could be smelled from two blocks away.

Crosby was the setting and therefore retained all his contradictions. Jackson Browne described it better than anyone when he called it a “hippie trick.” “He had a Volkswagen van with a Porsche engine and that combination said everything about him,” he recalls. Establishing himself as his great spokesman, he became even more boring than he already was. One-liners, moral and intellectual superiority, sex, drugs and – ditch rock ‘n’ roll on this sun-tanned side of the country – progressive left-wingers. This attitude influenced his big projects: The Byrds and Crosby, Stills & Nash (CS&N).

Just as he had a flair for relationships, he also had a flair for what music was cool in the new order that the rock ‘n’ roll earthquake had left among American youth. That was one of his virtues. Maybe the best. With his round face he saw some guys in the Troubador calling themselves Jet Set and he went on stage to sing with them impressed. The real names of these guys were Roger McGuinn and Gene Clark. Along with bassist Chris Hillman and drummer Michael Clarke, they formed The Byrds in 1964, fueled by the historic impact of the Beatles’ appearance on popular music. All American teenagers wanted to start a band in their garage or high school.

With permission from The Beach Boys and Creedence Clearwater Revival, The Byrds were America’s best answer to The Beatles. In fact, they were the first to still have lasting meaning thanks to those sublime vocal harmonies, goading Bob Dylan to recognize that in new pop, outside the closed loop of Greenwich Village folk, lay glory. A special band, lovers and connoisseurs of the American sound tradition, where everyone’s artistic visions came together and sought their space. With his crystal-clear voice, Crosby brought with him a feeling for the ballad and a certain fondness for jazzy passages. Basically, it was a less compelling bit compared to McGuinn’s glorious chimes of twelve-string guitars, Hillman’s massive melodic basses, or the mere presence of Clark, the finest songwriter of them all, and a riot of quality. 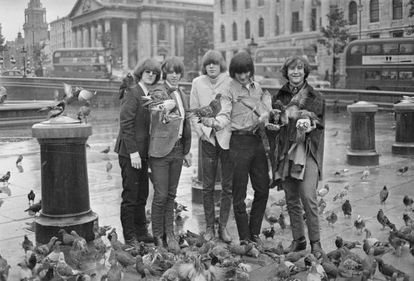 By the summer of 1967, Crosby, always insecure about the talent around him, had become intolerable to McGuinn, the group’s leader. The Monterey Pop Festival was the last straw that broke the camel’s back. Onstage, he’d gotten caught up in a political tirade about the Kennedy assassination, and on top of that he’d gotten up to sing with Buffalo Springsfield, the cool new folk guys who beat The Byrds. He and Hillman went to his house to tell him he was kicked out because he was “terrible.”

The parsley of all sauces that was Crosby knew how to make a living aside from other interests. In Monterey he had managed to bridge the gap between Los Angeles and San Francisco, which led to him joining the talented Stephen Stills from Buffalo Springsfield. The two met at Hootenannies hosted by Mama Cass Elliot of The Mamas and The Papas and Peter Tork of The Monkees. They recruited Graham Nash, who had shown great value with Britain’s The Hollies, but they didn’t want to sample the lecherous and political honeys of hippie vibes. He left to found Crosby, Stills & Nash (CS&N) in 1969.

Crosby’s braided guitars and delicate voice shone brighter than ever on the group’s debut. It was smooth, warm, distinctive music, perfect as a magical narcotic for Vietnam-stricken America entering a massive economic recession. Music that would make the singer-songwriter style fashionable in the 1970s. CS&N represented three different models with character and distinctiveness. Three models letting in a room: Neil Young. Too many roosters in the barn. 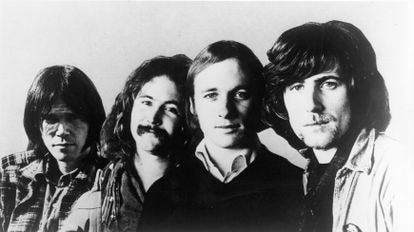 His appearance made everything even more dangerous and unpredictable. Young soon revealed his obsession with getting his ideas through. As Nash said, “When we made the first CS&N album, we all loved each other so much and we all loved each other’s music. When the déjà vu came, it all went haywire.” Deja Vú, the next album they released as Crosby, Stills, Nash & Young, was really good, although it sounded more pompous and lacked that unique symbiosis. Crosby, increasingly insufferable in his intellectual ringleader rhapsody and unsettled by Young’s undeniable new talent, eventually drove everyone to despair.In the end, their egos exploded and they all made it on their own, although years later they would reunite without Young and would make it through Importance of keeping the group afloat with good songs.

Crosby’s sense of smell, which had battled drugs for half his life, was a little lacking. He promoted the career of Joni Mitchell, with whom he had a romance that was as short-lived as it was whirlwind. He produced their first record, introduced them to the Hootenannies, and always defended their worth in such a competitive arena. He also showed different sounds solo, in which arpeggios predominated, as in the melancholic If I Could Only Remember My Name. Also worth noting is his collaboration with Graham Nash, who had to endure Crosby the most, always resigned and willing to sacrifice himself for the good of others. In 1972 they both recorded a very interesting album, hardly remembered among so many classic works of the time such as Graham Nash & David Crosby.

He wasn’t the best, nor the most tolerable, nor a true hippie, but David Crosby was in the midst of all that California glitz to see from the Laurel Canyon mountains overlooking Hollywood that a bunch of long haired guys could become the hype of his country . Another myth today for a nation that has always manufactured them to make their history live and direct.