In a statement, the TV network confirmed that all “CR7” games will be available to watch over its signal.

Good news for fans of Cristiano Ronaldo! DirecTV Sports confirmed that it will exclusively broadcast the most outstanding matches of the Saudi Professional League 2023. They also made sure that all “CR7” games can be seen through their platforms. They made it known through a statement and gave the exact date when this will be possible.

“Directv Latin America will exclusively broadcast highlights of the 2023 football season in Saudi Arabia on Dsports and DGO,” it begins.

All “CR7” matches will be televised

“Starting February 3, the sports signal will broadcast two local league games per day, ensuring that all games Cristiano Ronaldo plays with Al-Nassr are broadcast until the end of the tournament on May 31,” he adds added.

YOU CAN SEE: Cristiano’s “threat” to his agent: “Either you get me Bayern or Chelsea … or we split up”

They will also broadcast the Arab Super Cup

“In addition, Directv will broadcast the Saudi Arabian Super Cup, which takes place on January 26th and 29th in a play-off format. First, Al-Hilal meets Al-Fehia under the technical direction of Argentine Ramón Díaz. Then Al-Nassr meets Al-Ittihad. The winners will determine the tournament next Sunday.” 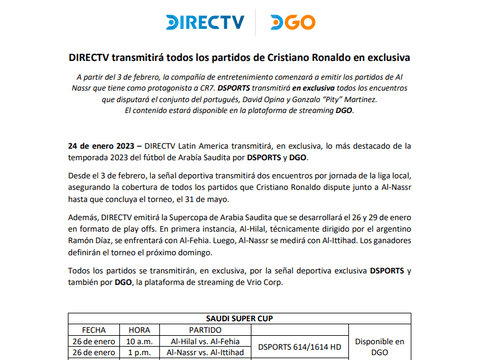 Next game from Al-Nassr

Cristiano Ronaldo’s side meet Al-Ittihad FC in the semi-finals of the Saudi Arabian Super Cup on January 26 at 13:00 (Peruvian time). In the Arab League, Al-Nassr meets Al-Fateh on February 3 at 10:00 Peru time.