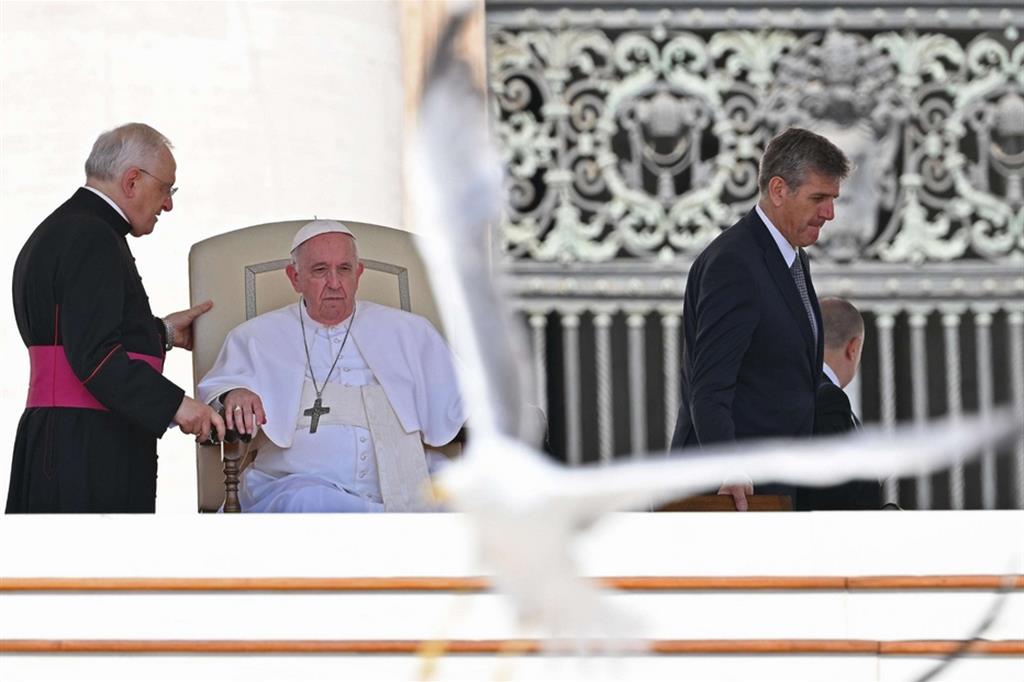 The memory fades, the pain threatens to cool down. Pope Francis uses this expression to describe the state of affairs that the Ukrainian population has been experiencing for almost four months. He does so at the end of this Wednesday’s general audience and impromptu greets Italian-speaking pilgrims. Once again the Pope’s invitation not to forget the tragedy of the war. “Please don’t forget the war-ravaged people of Ukraine!” “Let’s not get used to living as if war were a distant thing,” Francis continued, always without words: “Our memories, our affections, ours Prayer, our help, always go close to this people who suffers so much and perform a real martyrdom on him”.

“When you are old, you no longer control your body. We must learn to decide what to do and what not to do.” The Pope said this in the catechesis held in St. Peter’s Square and dedicated to “the simple and touching story of the healing of Peter’s mother-in-law”. “In old age, even a simple fever can be dangerous,” Francesco began, who then added impromptu: “In old age we can no longer do the same things as when we were young: the body has a different rhythm, we have to accept limits. We all have it: I too have to walk with the cane today”. “Physical strength diminishes and leaves us, even if our heart does not stop desiring,” observed the Pope: “We must then learn to purify desire: be patient, choose what you ask of the body, of life “.

“The disease affects the elderly in a different and new way than when they were young or in adulthood,” explains Francesco: “It’s like a hard blow that hits an already difficult time. The old man’s illness seems to hasten death and certainly shorten lifespans that we already think are short. It insinuates the doubt that we will not recover, that “this time will be the last time I get sick…”. It is impossible to dream of hope in a future that doesn’t seem to exist now. “A famous Italian writer, Italo Calvino, noted the bitterness of the elderly, suffering the loss of things of the past, more than they rejoice at the arrival of new ones,” the Pope quoted.

“This throwaway culture seems to be wiping out the elderly: it doesn’t kill them, it’s wiping them out socially, as if they were a burden to be borne, ‘it’s better to hide them'”. The Pope repeated this offhand in his catechesis. “This is a betrayal of humanity, it is the worst thing to choose life according to utility, according to youth, and not life as it is, with the wisdom of the old, with the limitations of the old,” said the renewed warning the text: “The elders have so much to give us, there is the wisdom of old age, they have so much to teach us. This is why, even as children, we must teach them to go to their grandparents: the dialogue between young people, children and grandparents is fundamental for society, for the Church, for life. Where there is no dialogue between old and young, something is missing, a society without dialogue is growing, that is, without roots”.

“Even as an older person you can, yes you must, serve the community”. The Pope is convinced of this and affirms: “It is good that the elderly still cultivate the responsibility of service and overcome the temptation to step aside. The Lord does not reject them, on the contrary, he empowers them to serve. The elders who maintain a willingness to heal, to comfort, to intercede for their brothers and sisters – whether they be disciples, whether they be centurions, those troubled by evil spirits, outcasts… – are perhaps the supreme testament to the purity of this gratitude that goes with faith”. “If the elderly were placed at the center of collective attention, rather than being dismissed and marginalized from the events shaping the life of the community, they would be encouraged to perform the precious ministry of thankfulness to God who forgets no one.” , Francesco’s thesis: “When Jesus sees the sick old woman, he takes her hand and heals her, the same gesture he makes to revive the young woman who was dead: he takes her hand and makes her get up, he heals them by laying them back at their feet,” he commented. According to the Pope, “Jesus, with this tender gesture of love, teaches the disciples the first lesson: salvation is announced, or rather communicated, by caring for this sick person; and this woman’s faith shines with gratitude for the tenderness of God who bent over her. If the first lesson was given by Jesus, the second is given to us by the older woman who ‘arose and began to minister to them’”.

THE VIDEO OF THE CACHESIS