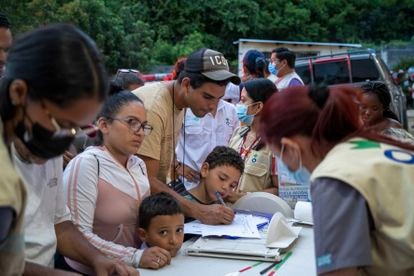 For years, NGOs have been in the eye of Chavismo. Diosdado Cabello, MP and head of government, has again threatened legislation aimed at regulating the funding, operation and use of these organizations. “Through NGOs they conspire against the country. They are not non-governmental organizations. They don’t depend on the Venezuelan state, they depend on the gringo state, they are instruments of imperialism,” Cabello warned Wednesday night on his show Con el mazo dando, which was broadcast on state television, after announcing that next week he would will bring forward a proposal of the law.

Although this legislation poses a constant threat, concrete steps were taken during the Maduro government to limit freedom of association and the work of NGOs. In 2021, a new mandatory register was set up in an anti-terror office, which was interpreted by civil society as a filter to restrict its activities. This new move, which accompanies the legislation, puts Venezuela on a par with Nicaragua, which has been repressing more than 3,000 legal entities over the past year, including those from universities criticizing the regimes of Daniel Ortega and Rosario Murillo.

The presence of NGOs has increased in Venezuela as the crisis deepens, with serious hunger problems affecting about 6.5 million people, the highest number in South America, and a devastated health system. Since 2019, the humanitarian organizations of the United Nations have been working hand in hand with local NGOs to help the population.

Beyond the legal tools that have become a constant threat, harassment of human rights defenders has increased during the Maduro government, to the point that it has led the International Criminal Court, which was reactivated last December, to investigate human rights abuses, that have occurred in the country. The documentation work of hundreds of NGOs was key to the creation of these files and the devastating reports of the United Nations Independent Fact-Finding Mission, which will continue its investigation over the next two years.

The Center for Defenders and Justice registered more than 240 attacks on activists guarding democratic freedoms in Venezuela in the first half of 2022. According to this NGO, those primarily responsible for these intimidating acts are “state officials”, in addition to the communication platforms linked to the government and the United Socialist Party of Venezuela. “Those who work to defend and promote human rights should not be classified as enemies. On the contrary, they are essential actors in restoring democratic institutions and promoting processes of justice, truth and reparation for victims of human rights violations,” the organization condemned last year.