The Montreal Metropolitan Chamber of Commerce (CCMM) warns that downtown is literally “infested” by the orange cones and the signage around the construction sites, which fears that the city’s image will suffer as a result. According to a study by the organization released Thursday, 94% of inner-city arteries were blocked at some point last year.

“One of the biggest annoyances for returning employees is the difficulty of getting around downtown. […] It’s like we admitted that Montreal is about to be defined by the orange skittles,” endorsed Chamber President Michel Leblanc at a news conference Thursday.

He regrets that the “excessive” presence of orange stalks negatively marks the spirits in the long run. Overall, between April 2021 and March 2022, more than nine out of ten thoroughfares (94%) in the city center were “temporarily partially or completely closed” and more than 5,500 permits were issued.

Additionally, over the past year, more than 96% of license applications have been accepted, showing that “the community is managing a little bit as it wants,” says Mr. Leblanc. The Ville-Marie district generated nearly $23.8 million, more than a quarter of its annual budget. 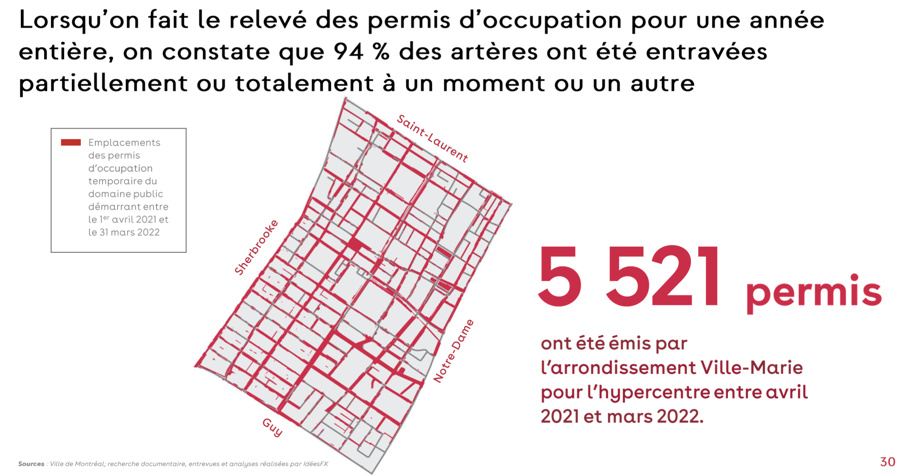 According to a survey by the CCMM, more than a quarter of the metropolis’ orange cones are downright “useless”, being either “abandoned” or “purposeless”, but nonetheless “used systematically” during the works. . For example, downtown Peel Street is 57% cones and has orange signs 100% of the way.

The study shows that the Rue Saint-Urbain has been closed for nine years. “If there’s an example where coordination can be lacking, this is it. We create constant obstacles because the industry is not timely,” says Mr. Leblanc.

From the chamber’s point of view, the cones should only be used “for a short time or on motorways”. In general, downtown signage should be more “agile” to adapt to the “high density” of this sector.

According to the CCMM, a “dynamic pricing policy” based on the use of the commons by area and useful life would make it possible to remove the barriers. In other words, according to certain criteria, builders who lower their barriers would pay less for their permits and those who raise them would have a higher bill, like a monetary “bonus-malus” system.

It is also proposed to impose an “off-peak” delivery deadline, particularly early in the morning, which would limit the presence of trucks in the city center during the day. The organization also suggests considering “bypass plans” to devote certain areas entirely to active or car traffic when obstacle densities are too high.

The CCMM also believes that the city’s public tenders should take into account the external costs of construction sites, such as their lifespan, completion time and potential for congestion and nuisance. The organization also calls for all data on the obstacles to be “centralized” on a single platform managed by Quebec, Montreal and several other partners such as Hydro-Quebec, Bell or Énergir.

At the City of Montreal, Executive Committee President Dominique Ollivier recognizes that “there are some problems on the construction sites and that there is room for improvement”. In the same breath, however, she affirms that only 30% of construction sites come under municipal administration. “If everyone doesn’t feel part of the solution, we’ll never make it,” she says.

The Plante administration calls on Quebec and the project promoters to open a real dialogue. “You have to bring everyone together, sit down, everyone recognizes their part of the problem and we agree on standards together. With the Worksite Summit this spring, we aim to do just that. There are things that can be implemented quickly,” emphasizes Ms. Ollivier.

“Regulatory changes require a certain number of studies and meaningful figures. There we have a study based on about fifty interviews and data. I’m not saying it’s not interesting, but you have to watch them to see if they correspond to reality. Traffic flow modeling is not done by yelling at Jeannot Lapin,” concludes number two by Valérie Plante.

Montreal Centre-Ville general manager Glenn Castanheira believes the priority is tackling “orphaned” and abandoned cones, which occur in “very high” numbers. “We would have essentially the same obstacles but a lot less frustration. In Paris there are ten times more construction sites, but 100 times fewer cones! Incidentally, the [ministère des Transports] changes its signage regulations. It won’t change tomorrow, but it takes that to sort it out,” he said.