Tensions were clearly running high in the Bills’ AFC wildcard playoff game against the Dolphins on Sunday afternoon.

Buffalo was 17-3 in the second quarter when Allen tried to break the heart of the Dolphins with a deep shot down to receiver John Brown.

However, the quarterback threw an interception to cornerback Xavien Howard instead.

After Howard hit a huge 49-yard return on interception, Allen was visibly frustrated and apparently took it against Wilkins on the Miami defensive end, leading to an all-out scuffle between the two teams.

Clearly unhappy with a late push from Wilkins, Allen decided to respond with one of his own.

He then got into a violent brawl with the six-foot-tall, 310-pound defender, pushing each other back and forth. 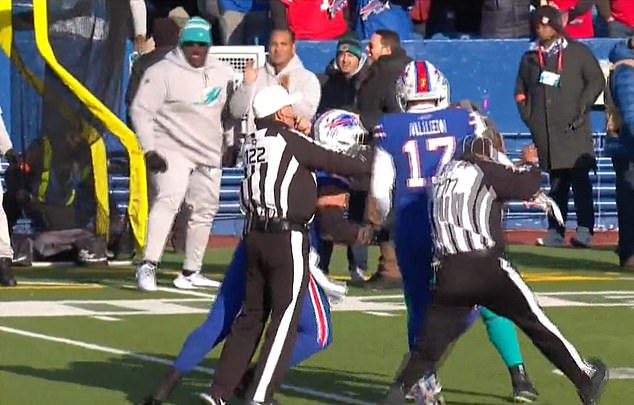 Clearly unhappy with a late push from Christian Wilkins, Allen began pushing it back 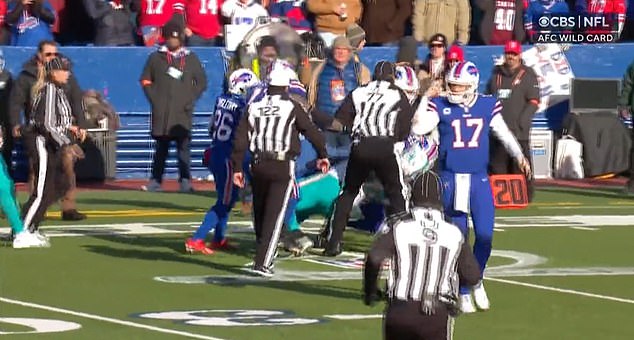 Officers attempted to intervene, but Allen’s teammates rushed in and flattened the defensive tackle

Officers then intervened, with one throwing a flag before separating the two as Allen walked away from the scuffle.

But it was too late to stop his teammates from defending him as they flocked to the crime scene and pinned Wilkins to the ground. Dolphins players then rushed in to support their teammate, sparking a mass battle.

In bizarre and hilarious scenes, Bill’s offensive lineman Dion Dawkins then emerged from the brawl, clutched the helmet of an unknown Dolphins player, and began playing keep-away.

Emotions are clearly running high during the playoffs, but Allen needs to keep his emotions in check after Miami staged a comeback to go 17-17 ahead of halftime. 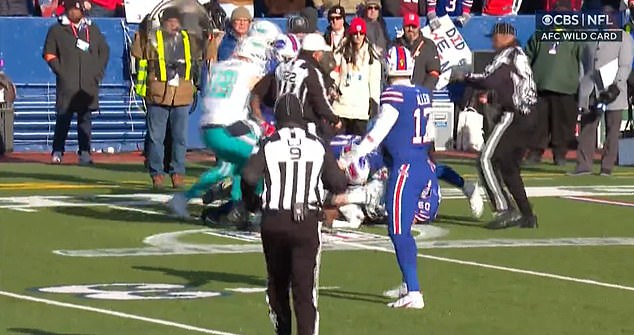 Dolphins players then rushed to defend their teammate, sparking a mass battle on the field