The oldest member of K-pop supergroup BTS completed five weeks of basic training as part of his compulsory military service in South Korea.

On Wednesday, Jin posted to fan community app Weverse for the first time since he was enlisted last month, sharing three photos of himself in a military uniform.

“Having fun. Posting a photo with permission from the military,” the 30-year-old wrote. “Army, always be happy and stay healthy,” he added.

Military service is compulsory in South Korea, where almost all able-bodied males are required to serve in the army for 18 months by the age of 28.

Jin entered the Yeoncheon Training Center on December 13, 2022 and has since been selected to serve as an auxiliary instructor at the Yeoncheon Army Base in northern Gyeonggi Province, according to the South Korean military. 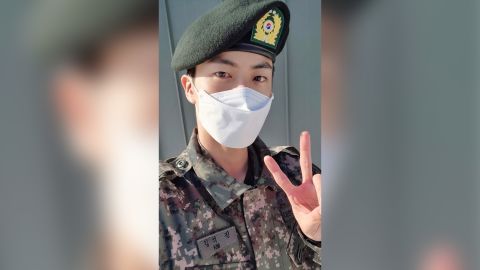 BTS have become global superstars since their debut in 2013, earning #1 singles in more than 100 countries and more than 46 million followers on Twitter, and were named 2020 Time Magazine Entertainer of the Year.

Under a 2020 bill passed by Parliament, South Koreans who “excel in popular culture and the arts” would be allowed to stay out of compulsory military service until the age of 30.

Jin, the oldest member of BTS, is the first in the group to sign up. He will be one of about 560,000 army soldiers, according to the South Korean Army website.

The group’s record label, BIGHIT Music, announced in October that all seven members would be doing their military service.

BTS is expected to reunite as a group around 2025.