Young mum’s incredible 12-month transformation wows millions – but she’s so good-looking, trolls have accused her of faking her new body

By Sophie Finn for Chron Australia

A single mother-of-two hit back at followers who accused her of faking her incredible 365-day transformation.

Bre Foster, 28, has uploaded a video proudly showing off her postpartum transformation after giving birth to her second child, but she wasn’t expecting the many negative comments it drew.

Hundreds of people accused Bre of having surgery and even suggested the before picture wasn’t her.

The American mom revealed she’s only lost weight through consistent exercise and a healthy diet, which is a walk in the park compared to motherhood.

Single mother-of-two Bre Foster, 28, hit back at followers who accused her of faking her 365-day transformation 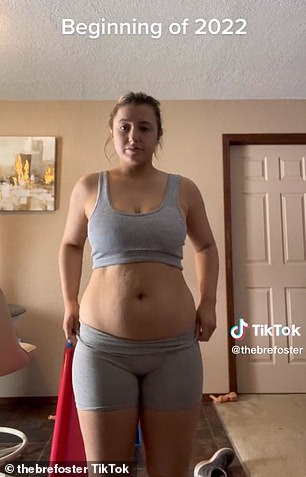 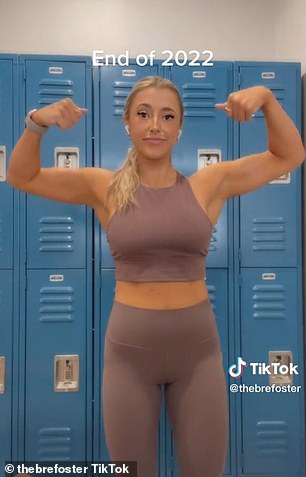 Before and After: Bre uploaded a video proudly showing off her postpartum transformation after having her second child, but she wasn’t expecting the many negative comments it drew. Hundreds of people accused Bre of having surgery and even suggested the before picture wasn’t her

The clip showed a clip of Bre in early 2022 following the birth of her second daughter and then jumped to another clip showing a much toned version of her in late 2022.

“Remind yourself that if you start now, your future self will thank you,” she said.

“Your worth doesn’t depend on what you look like, either. But you’ll feel a heck of a lot better if you focus on your health and make yourself a priority.”

‘You’re worth it. After all, don’t do it for anyone other than you, because at the end of the day, it’s just you against you. So make it personal because it is.’

People immediately shared their doubts and accusations in the now-deleted comments section.

“Certainly not you,” said one person.

“Is that the same person? hmmm not sure,” commented another.

One person even accused Bre of altering her body with the help of a “great surgeon.”

‘DR. Gym is highly recommended. Side effects include endorphins, confidence, strength and stamina,” the mother replied to the troll.

What did Bre do to transform her body?

* She focused on running, strength training at the gym and healthy eating

* She made sure to be consistent and exercise every day

Several people accused Bre of editing the clip of her in late 2022 to make her look thinner than she actually is.

She uploaded a second unedited video to show off her body from a 360-degree view, and explains she only used the filter because her tan was “super spotty.”

‘Yes [it is the] same person! But here’s an unedited video with no filter for full transparency,” she said.

Hundreds of people were inspired by the transformation and asked about its results.

‘You look great. I can’t believe people were really skeptical about the transformation,” said one woman.

“Please share what you’ve been doing to get in such great shape! You are beautiful!’ another wrote.

The mother shared the “one thing” she had heard that “has literally changed [her] life’ and inspired her to continue to devote herself to training.

“You’re a mom and you do hard shit every day, you can do a 30-minute workout. You can walk a mile. You can choose to eat healthily,” she said.

“All of these things are child’s play compared to what moms do every day.”

“Compared to pregnancy, postpartum depression and prenatal anxiety, exercise is a no-brainer.”