Her parents called her Marita, her friends from Totana call her María and her children call her “Mama”, but all of Spain knows her as Bárbara Rey. María Margarita García García (Murcia, 72 years old) has been using this stage name for half a century, which has flowed streams of ink and broadcast hundreds of hours on television. After being chosen as the second bridesmaid at the Miss Spain pageant in 1972 and being among the 15 finalists for the Miss World pageant, the actress, presenter and former Vedette decided to search for a pseudonym, an artistic alias. “María García would be great now, but then the artists needed spectacular names to stand out. One day I met with my representative and together we made a list with the names of famous American actresses and another with the surnames of well-known Spanish actors. At that time, Fernando Rey had success with the film The French Connection and Barbra Streisand was already a world star. I liked the combination and the rest is history,” says Rey in an interview with EL PAÍS.

The actress has been on TV all week promoting Cristo y Rey, the biopic series streaming platform Atresplayer Premium has just released about her tumultuous marriage to tamer Ángel Cristo and her relationship with King Juan Carlos . Belén Cuesta plays Bárbara, Jaime Lorente takes on the role of the circus impresario and Cristóbal Suárez plays the monarch. I’ve only seen the first two episodes. I asked them to stop teaching me. I want to surprise myself and surprise the audience at the same time,” says Rey. In fact, she already knows how the series will develop because she advised the writers throughout the process. “It’s basically my life,” he admits. “There are moments in my life that I have not yet verbalized. Out of modesty I did not dare to count them. I had them inside and they did me a lot of damage.

Already in the first chapter of Cristo y Rey an open secret is confirmed: the story that Rey lived with Juan Carlos de Borbón in the late seventies, just before he met Ángel Cristo. “I don’t say anything that other people haven’t already said. Actually, I said less and less. But I had to say it, and I had to say it,” he says.

Question. Is this series finally giving you the recognition you deserve?

Answer. I never thought they would do a TV series about me or any part of my life. I see it as recognition and a chance to get to know myself better. There was always an attempt to give a picture of me that didn’t correspond to reality. I’ve been portrayed as a cold, distant, calculating woman…and I’m the opposite of all of that. 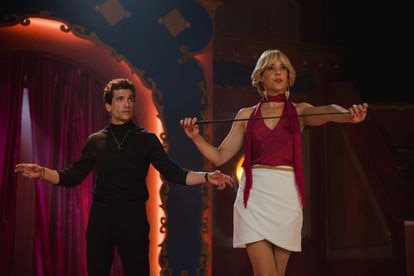 Jaime Lorente and Belén Cuesta, as Ángel Cristo and Bárbara Rey in the series Christ and King.

Q She was abused by her husband Ángel Cristo. Did you find it difficult to talk about it?

R For a long time I didn’t dare to speak because it was a different time and I didn’t want to hurt Ángel. It was hard for me to admit that publicly. My friend cello [García Cortés] She was the first to tell it on TV. I didn’t want to spoil Angel’s image. But one day he spoke badly about me and I decided to admit what I had been through. I did it for free, at a conference on sexist violence where other women had suffered abuse.

Q But then he forgave Angel…

R Yes, I forgave him. When the relationship ended, he often needed me for health reasons and I was there. Ángel was sick many times: he was caught by the lions, he overdosed, he had two life and death surgeries for intestinal perforations… Many things happened to him and I was always there. I have forgiven him, but I cannot forget it. When I met him, I thought my marriage would be a bed of roses, but everything was very different. I had a very bad time and I endured as long as I could. I accepted it because I loved him, I accepted it because he had two children, and I accepted it because I didn’t want to see him suffer. I loved Ángel, but he didn’t know how to love me.

Q Did men in general not know how to love them?

R Men never knew how to love me. I became very famous at a time when men still wanted to marry a pure, chaste, virgin woman. But those same men were attracted to the idea of ​​dating me. They wanted me for some things but not to have a serious or formal relationship.

Q The same happened to Rita Hayworth, who said this phrase: “All the men I know go to bed with Gilda, but they get up with me.”

R same thing happened to me And it was hard for me. Men have not behaved well with me.

Q Who was the man of your life?

R My husband, Angel Cristo. Regardless of what happened, I was very much in love with him and thanks to him I have two children. Now I’ve been single for many years, almost 13, and I’m in glory. I don’t miss being in a relationship.

Q Have you ever experienced sexual harassment at work?

R I never wanted to talk much about this topic because then people don’t believe me. But yes, on two occasions I have been very seriously molested by two people, one from the world of cinema and the other from the world of television. I won’t give their names because I can’t prove it. Also, one of them is dead and the other one is nearby.

R They tried to get their hands on me and said very disgusting things to me. Back then you couldn’t denounce it, it was unthinkable. A culture of silence prevailed. When I told the representative that I had what happened at the time, he was surprised that I didn’t agree with these suggestions. He even got mad at me for not accepting them. I can say with my mouth full that I never agreed to anything like that. 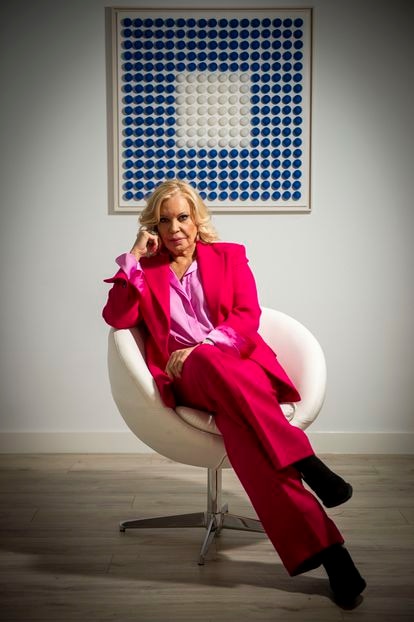 Actress Bárbara Rey in a hotel in Madrid during the interview with EL PAÍS on January 19, 2023. JUAN BARBOSA

Q The first chapter of Cristo y Rey ends with a scene where she enters Zarzuela Palace. How did you meet the Emeritus King?

R I can’t tell you because that’s going to be on the show. I don’t want to anticipate. But it’s a lie that Adolfo Suárez introduced him to me. Many lies have been told on this subject.

Q How would you define the relationship with him?

R It was more than a friendship… it never went beyond a close friendship.

Q So there was no love…

Q Do you define yourself as a monarchist or republican?

R The monarchy has given our country great stability. I prefer monarchy to republic.

R For all I’ve seen and for all I know, I still prefer the monarchy.

Q How do you see Queen Sofia?

R I see her better than before, very rejuvenated. It holds up very well.

Q In the 1970s she was contracted by the Treasury Department to promote the income statement campaign. What are your thoughts on King Juan Carlos’ tax irregularities?

R I’ve had hundreds of thousands of favors requested that have not even been rewarded with a thank you. I stood up for the Union of the Democratic Center 1977 and 1979 and the Treasury Department campaign. I’ve done a lot for people who haven’t done anything for me. I don’t want to comment on the king, but obviously I don’t think what he did is right. On the other hand, if they had to condemn everyone on this matter, very few people would be free in Spain. There are many people who have made their fortunes thanks to the reserved funds and are not in Abu Dhabi. They continue to live in Spain and continue to earn.

R I won a lawsuit against a media outlet for saying that and I have other lawsuits pending. It wasn’t possible to prove it because it’s not true. Anyone who claims that has to prove it. If they show me that they gave me this money and that I had an account in Luxembourg with I don’t know how many millions, then not only will I not sue, I will ask them to give me the account number. I’ve been thinking: what if they actually gave me money and someone held it on the street? The only public money I received was for my work at two public television stations.

Q It was also said that they gave her these TV programs to silence her, to buy her silence.

R It seems like I was never worth anything. Nobody gave me anything. Everything I have I got through work and because I’m worth it.

Q In 2021, Compromís asked him to appear in the Senate to clarify the payments he received from Valencian television. Would you like to perform?

R I was very sorry not to be able to appear in the Senate because he had already bought me a divine, wonderful, sequined suit. I would have liked to have explained everything. Then they decided not to take me and I was disappointed.

Q She is titled “Muse of Transition”. Are you interested in politics?

R I don’t follow her because I don’t like lies. I’ve listened to a lot of phone calls from very important people and I know how Calico moves.

Q No one knows how power moves better than you…

R I said calico. If you want to call it power…

Q Have you received any awkward calls from the show power?

R No, they dare not. you already know me It’s better not to call me.