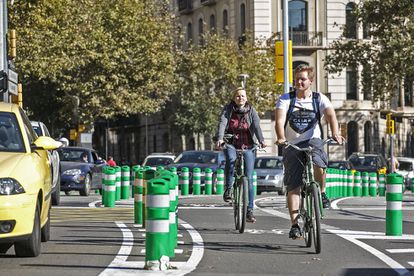 streets transformed into avenues for cyclists and pedestrians; that the rental price is calculated based on the emissions of the apartments; an annual mileage cap for cars based on their pollution level; or discounts for container returners. These are some of the tasks that the citizens of Barcelona are delegating to the next municipal government, handing over to Mayor Ada Colau and municipal groups this Thursday. It was a pioneering experience of city-level participation: the Citizen Assembly for the Climate. It started last summer by sending 20,000 participation letters to a representative sample of Barcelona citizens, 1,600 residents responded and 100 people between 16 and 75 years old were randomly selected, representative of the population in terms of sex , age, district and study level.

The Assembly experience is inspired by other deliberative processes held at the Spanish and Scottish levels alongside the Fòrum Jove in the city of Barcelona itself. And the process was half led by the Department of Climate Emergency and Participation. Those elected had to pledge to attend and received financial compensation for attending the meetings, as is the case at polling stations.

In September, the members of the assembly received training and further education on topics related to climate change such as urban planning, consumption and mobility. Some sessions, led by experts, explains Irma Ventayol, director of the city council’s office on climate change, a technical position, not a political one. A second phase was discussed and proposals submitted until finalized; and in a third phase, the proposals were voted on until 34 were reached, which received more than 51% agreement among the participants. It’s about energy, mobility and consumption.

Various actors are involved in the 34 final proposals: the city council itself or other administrations, citizens or companies or property owners in the city. Ideas are submitted to the council, such as reducing energy consumption, promoting energy communities, promoting door-to-door garbage collection, more green spaces or green axes for bicycles and pedestrians. At the supra-municipal level, it is proposed to align the environmental zone (ZBE) with a maximum mileage per vehicle based on its emissions (now the most polluting cars are banned): “The current ZBE encourages switching to cars and this creates an environmental impact and benefits those who can change their car. It is about reducing the pollution caused by all private vehicles, because it is based on their environmental impact,” says the document, on a proposal bordering on the minimum consensus (52%).

With regard to the private sector, it is proposed to create a pole of companies dedicated to reducing energy consumption and the ecological transition, promoting teleworking or regulating the rental price according to the energy efficiency of housing: “Limit the rental price according to energy efficiency is one good way to put pressure on the property to carry out renovation work.” The recipe is: “Reduce the rental price depending on the level of your energy performance certificate”: the higher the efficiency, the more you can charge. Another proposal is to establish a “minimum consumption of essential energy”, ie energy costs are based on consumption: less consumption, cheaper.

In terms of citizens, the actions that directly affect them are related to consumption and waste. Proposals such as an application for measuring the carbon footprint of citizens, self-repair workshops in neighborhoods, “powerful” actions against food waste or the creation of a system for “deposit, return and reuse of packaging in municipal markets”.

“Climate change is so complicated that we all need to get involved,” Ventayol emphasizes about the citizens’ assembly process: “Having citizens making suggestions empowers them, the process is useful because of what they have learned, with a level of motivation and wish to contribute very high. It’s an oil stain, they will share the proposals with their families, colleagues… and they will spread the culture of sustainability, we have 80 or 90 prescribers”.

Elisabet Manich, 20, is one of the congregation members and shares her experience: “I received the letter and although I am very concerned about climate change, I was not involved at all, it seemed like an opportunity to participate. Now I’m 100% involved, I want to continue on the Monitoring Committee and I’m raising awareness around me and sharing what I’ve learned. I think it’s a big issue and we all have to get involved.” Manich points out that he put a lot of effort into the proposal to change the way the LEZ works, although he admits that “it will be difficult to get it implement”.

The experience of the Citizens’ Assembly for the Climate is one of the actions that stood out in last Wednesday’s election of Barcelona as the European Capital of Democracy by The Innovation and the Politics Institute. The election was decided after the evaluation of European city projects by 2,500 citizens of the member states of the Council of Europe. The finalist cities were Barcelona, ​​​​​​Braga and Brussels.