Aston Martin has unveiled its “most powerful production car of all time”.

Called the DBS 770 Ultimate, it is the latest version of its grand tourer with a heavily tuned V12 engine, launched in the year of the British marque’s 110th anniversary.

With a massive 759 hp from a 5.2 liter twin-turbo petrol engine, it can reach breathtaking speeds of up to 340 km/h.

Just 499 are to be built as a swan song for its stunning GT model, each costing in excess of £300,000. But you might as well put your wallet back in your pocket, as Aston has already made deposits on all of them.

The ultimate DBS: Dubbed the DBS 770 Ultimate, this is Aston Martin’s “most powerful production car ever” and the final version of its grand tourer with a heavily tuned V12 engine

As the name suggests, this is the ultimate DBS Superleggera from the luxury automaker, saying goodbye to one of the brand’s most beautiful existing models.

But the 770 guarantees it won’t make a smooth exit.

While it’s touted as the manufacturer’s “most powerful production car ever,” the key word to consider with this claim is “production.”

The reality is that this isn’t the most powerful road car to leave its Gaydon factory, as ‘exclusive’ models like the one-of-a-kind 836hp Aston Martin Victor and 150 1,160hp Valkyrie hypercars trump it in horsepower alone.

But that small caveat doesn’t make the DBS 770 Ultimate any less brutal…or noisy. 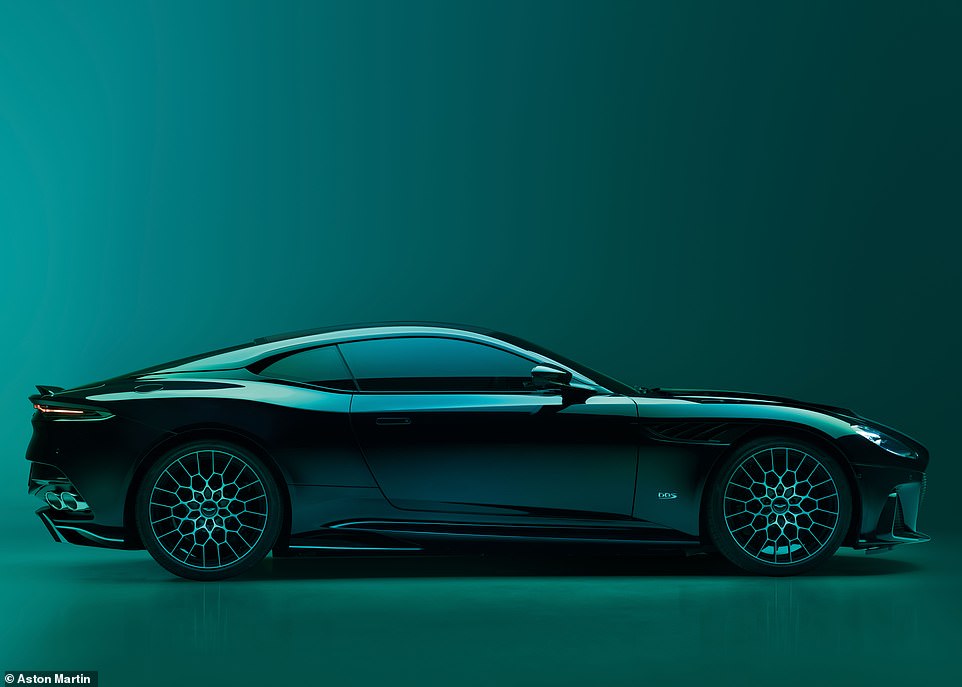 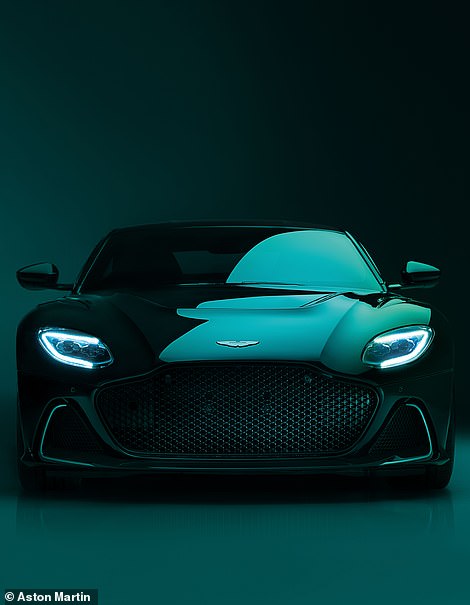 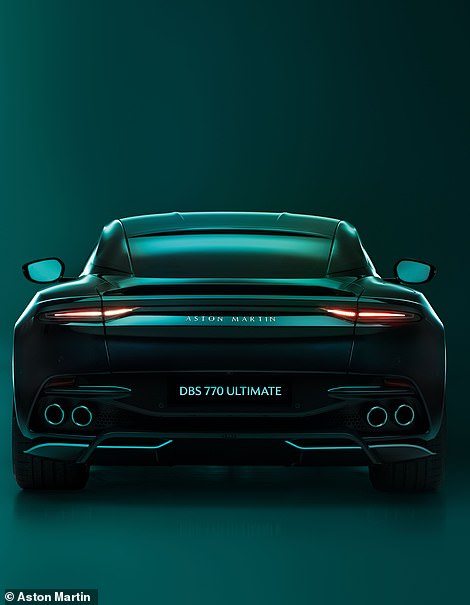 While it’s touted as the manufacturer’s most powerful production car, the keyword to consider is “production.” That’s because 499 examples are enough to qualify as a production model, although a number of more powerful ‘exclusive’ Aston road cars have left the Gaydon factory in recent years

Aston Martin engineers worked their magic to squeeze another 44 hp out of the 12-cylinder engine, thanks largely to increased boost pressure and optimized air and ignition paths, the automaker says.

Connected to an eight-speed ZF automatic transmission, power is sent to the rear wheels via a mechanical limited-slip differential.

Aside from the engine, there were a few other changes from the ‘standard’ DBS.

While it shares the same carbon-ceramic brake setup, it has exclusive 21-inch wheels inspired by the Valkyrie hypercar, said to have a “jewelry” appearance.

The suspension has also been upgraded, with the adaptive dampers recalibrated to offer additional agility without sacrificing ride quality, while other chassis tweaks have increased torsional stiffness by three percent.

Marek Reichman, Aston Martin’s Chief Creative Officer, announcing its arrival said: “DBS has always sat at the top of Aston Martin’s production model range. And now we’re bringing even more to DBS 770 Ultimate… more power, more purity of performance, and all with more refinement, more flavor and in the most considered way.

“Something so raw, yet so beautiful, it’s almost intimidating to look at.

“Through this design approach, we developed the shapes – starting with the reinforced front end – and from there everything else flows in design balance with the performance gains.” 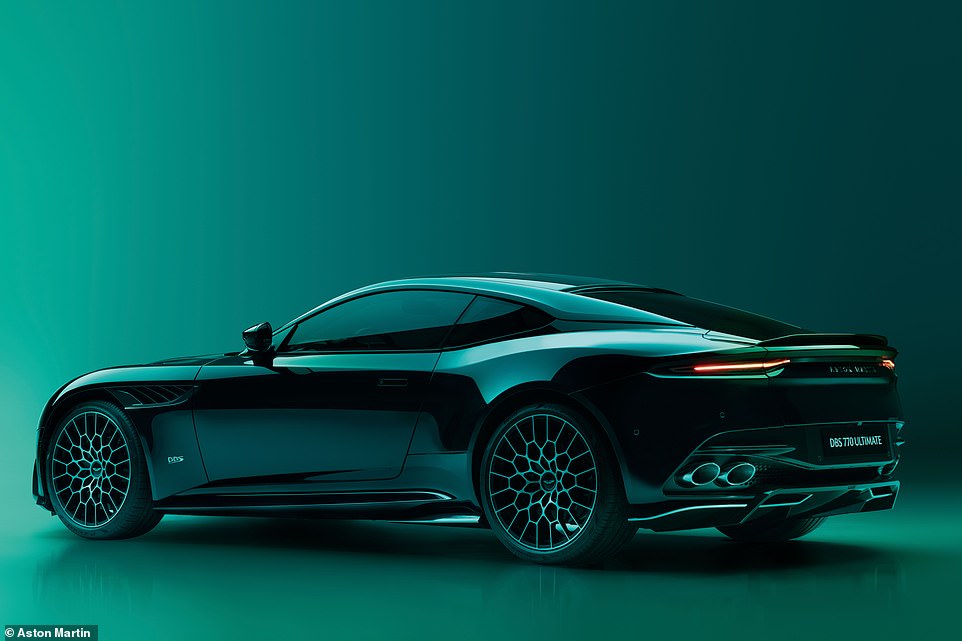 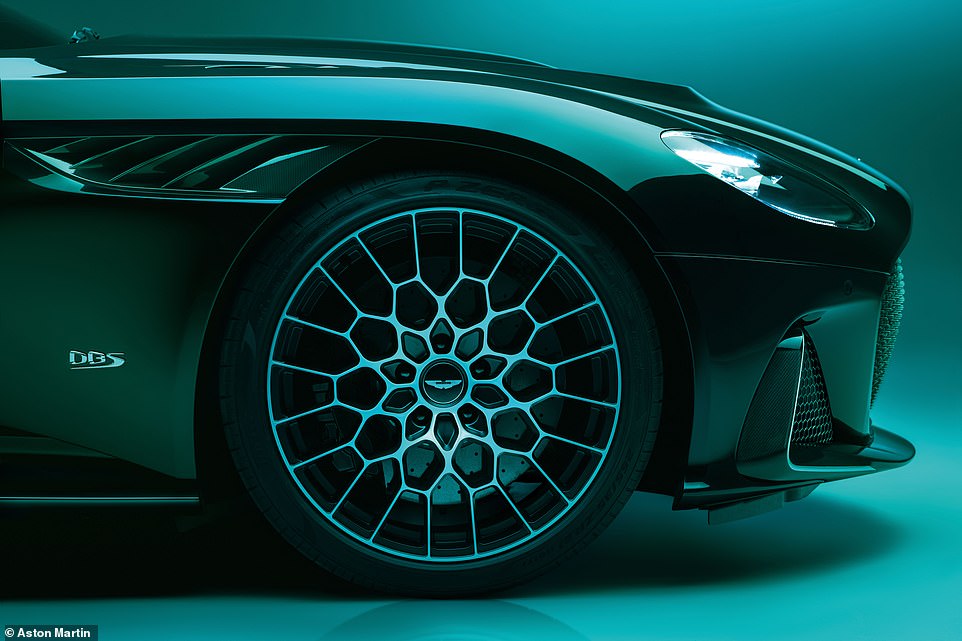 While it shares the same carbon-ceramic brake setup, it has exclusive 21-inch wheels said to be inspired by the Valkyrie hypercar, with a “jewelry appearance.” 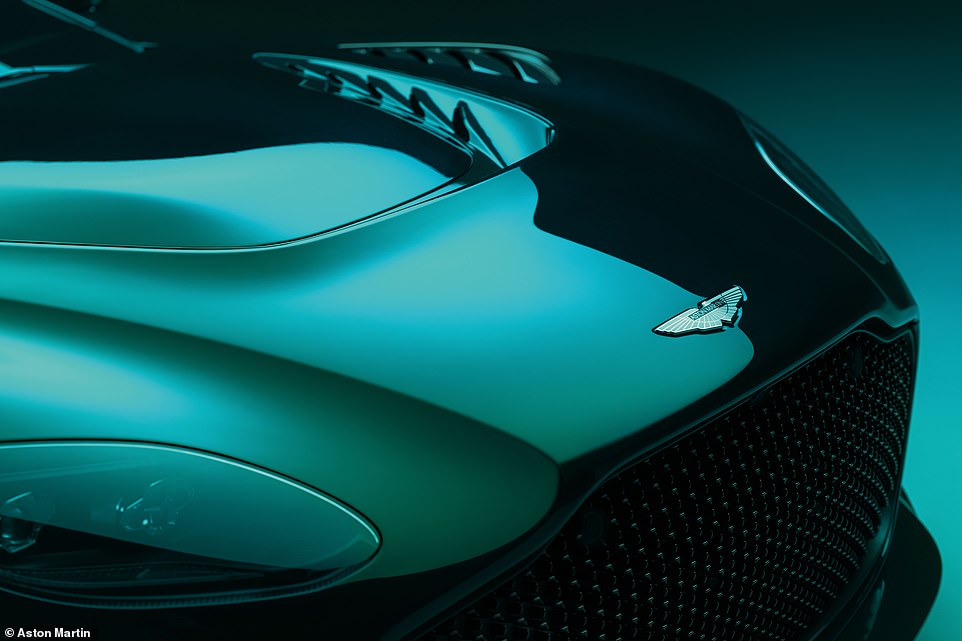 Design changes to the ‘regular’ DBS include this deeply recessed hood scoop, designed to draw air through the radiators to improve cooling

As Mr. Reichman points out, distinguishing the 499 Limited Edition 770 Ultimate from a “regular” DBS shouldn’t be a difficult task.

The all-round more aggressive design of the swan song versions is emphasized by a new carbon fiber rocker panel. The company says this “visually lowers the side profile towards the rear wheel” and “creates a balanced stance that accentuates the muscular physique of the DBS”.

It also gets a unique front splitter and rear diffuser combo, a deeply recessed hood scoop to draw air through the radiators to improve cooling, and an array of additional carbon fiber panels and louvers. 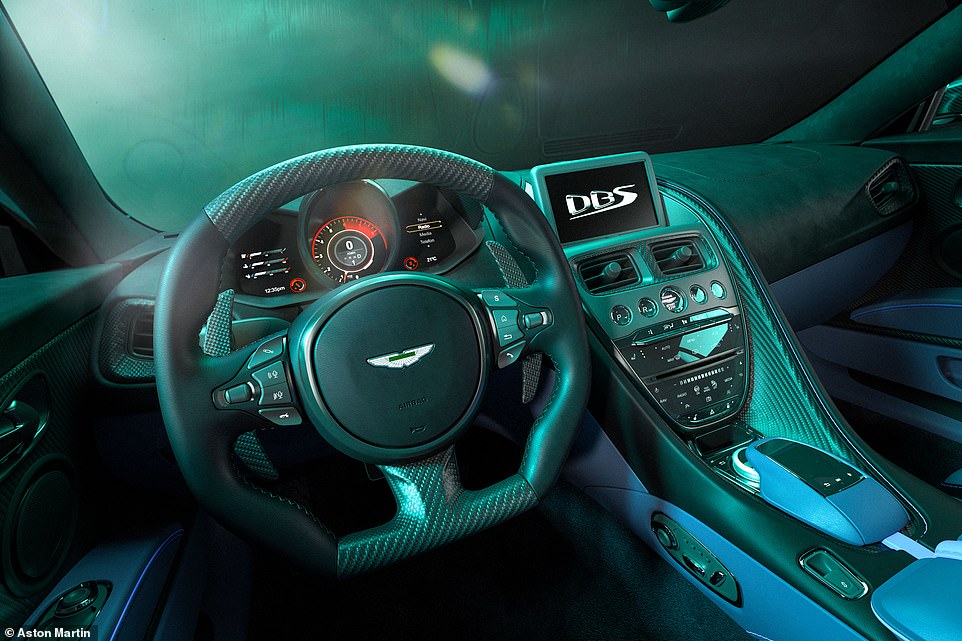 Inside, the carbon enhancements continue with a flat-bottomed steering wheel and splashes of lightweight material on the center console 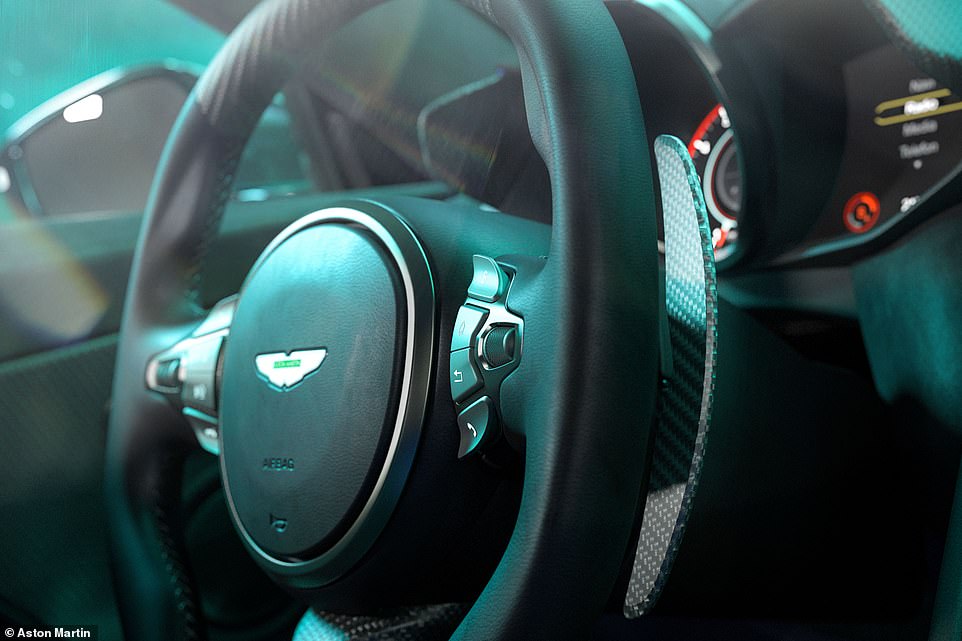 Even the paddles on ZF’s eight-speed automatic transmission are made from featherweight carbon fiber, all with the goal of shedding mass 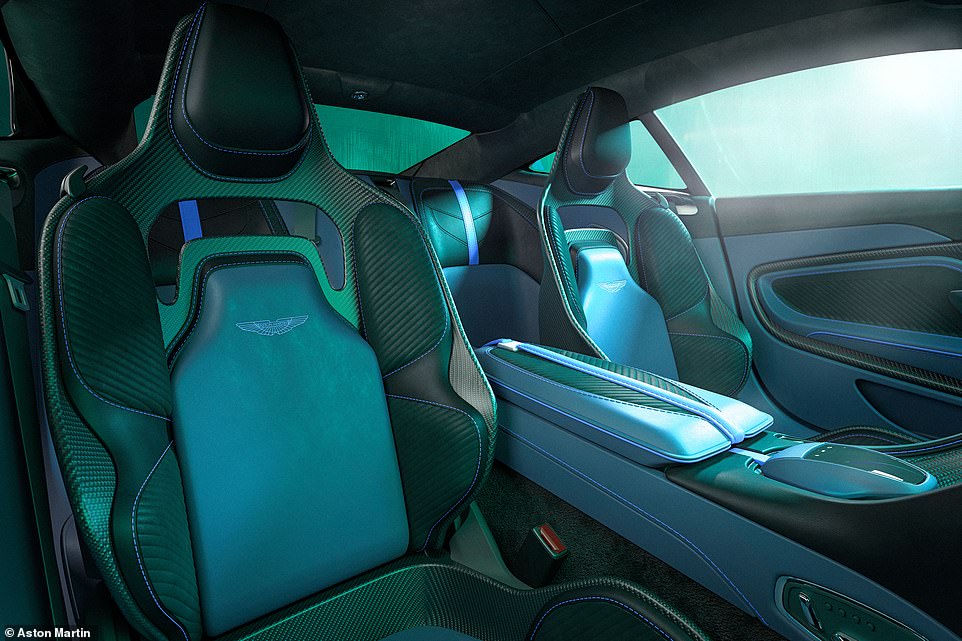 Inside, the carbon upgrades continue and include a pair of new front bucket seats trimmed in leather and Alcantara, a flat-bottomed steering wheel and the accompaniment of carbon-fiber paddle shifters.

The 499 customers who already have their names on the available cars can push the price of their DBS 770 Ultimate even further up if they so choose with additional customization options available through Aston Martin’s Q Division.

This ranges from everything including bespoke graphics packages, unique wheel colors and contrasting leather trim.

And it’s not the only limited-edition model the British carmaker is promising as part of its 110th anniversary for 2023, with another unnamed Aston Martin set to be unveiled as part of the celebrations.

Some links in this article may be affiliate links. If you click on this, we may earn a small commission. This helps us fund This Is Money and keep it free to use. We do not write articles to promote products. We do not allow a business relationship to compromise our editorial independence.