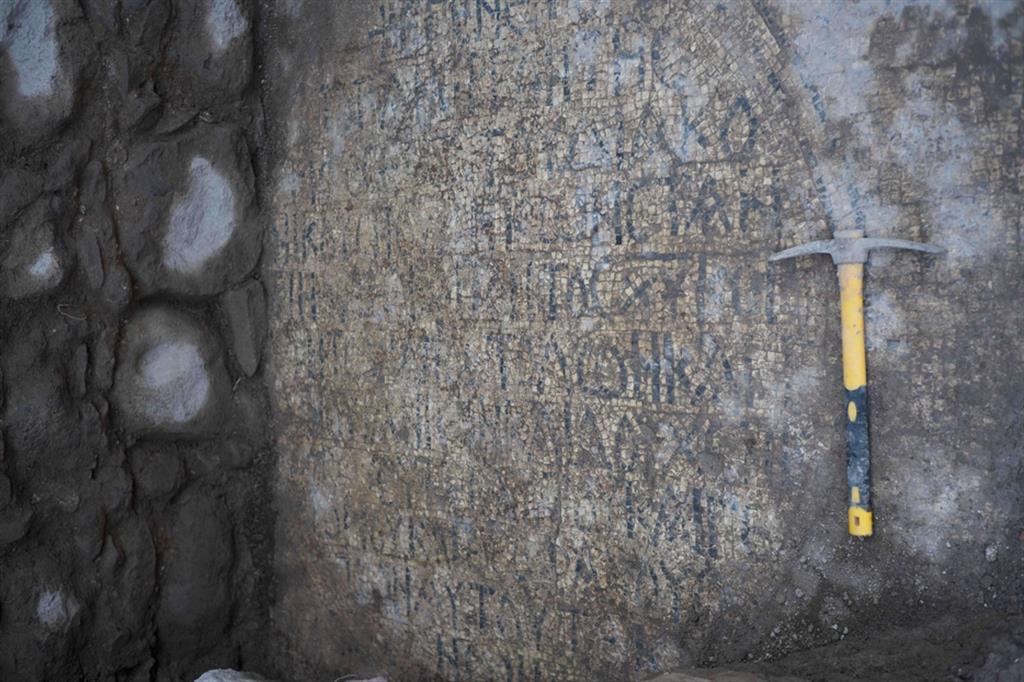 Was the city of Bethsaida found where, according to the Gospel of John, the apostles Peter, Andrew, and Philip were born? Archaeologists from Kinneret College (Galilee, Israel) and Nyack College (New York, USA) are convinced of this after finding a 6th-century mosaic inscription at the El-Araj site in northern Israel.

The medallion with a Greek inscription discovered by researchers during excavations of a Byzantine basilica refers to the donor “Constantine, servant of Christ” and continues with a request to St. Peter “head and commander of the heavenly apostles”. This mosaic adds to a long list of other finds from the site which the team believes provide definitive evidence that the site is in fact the city of Bethsaida mentioned in the Gospels north of the Sea of ​​Galilee.

The medallion was found during excavations a few meters from the north shore of the Sea of ​​Galilee at El-Araj, reports the Biblical Archeology Society’s online newsletter. It’s not the first mosaic inscription the team led by Professors Mordechai Aviam and Steven Notley has discovered in the Byzantine basilica. However, it may be the most important. The inscription is part of a larger mosaic floor in the diaconium of the church (a kind of sacristy), partly decorated with floral motifs.

According to Notley, “This discovery is our strongest indicator that Peter was specifically associated with the basilica likely dedicated to him, since Byzantine Christian tradition usually identifies Peter’s house at Bethsaida and not at Capernaum, as is the case today.” is.” .

This identification is supported by many travel journals from the Byzantine period, including that of the 8th century by Willibald, Bishop of Eichstätt, who stopped at Bethsaida to visit the Church of the Apostles built over the house of Peter and his brother Andrew . “Now we can say with certainty that this is the church that Willibald attended, which is Bethsaida to him, so to us, too,” Aviam said. Likewise, Notley had stated in previous interviews, “There are no other churches nearby mentioned by Byzantine visitors to the Holy Land, and there is no reason to doubt that this is the Church of the Apostles.”

Between the late 1980s and 1990s, a team of archaeologists had identified nearby Et-Tell as the site of Biblical Bethsaida. The team excavating at El-Araj believes the discovery of the Byzantine basilica and associated artifacts is clearly pushing the evidence their way. The archaeological team and the inscription’s translators, Leah Di Segni and Yaakov Ashkenazi, will soon publish a scholarly article on the mosaic.

“One of the aims of this dig – explained Aviam, archaeological director of the dig – was to verify whether there is a first-century stratum at the site, which would allow us to propose a better candidate for identifying biblical Bethsaida . We found significant remains from that period, but we also found this important church and the monastery that surrounded it. The excavated Roman remains corroborate the testimony of Flavius ​​Joseph (Jewish Antiquities 18:28) that the village became a small polis called Julias (Juliet). The city would have been destroyed by an earthquake in 749, while the arrival of Islam in the region would have hastened its decline.

The excavations will continue in October, when the cleaning of the whole church will be completed, in order to answer the question of its different phases and possibly discover more inscriptions.

The site of el Araj / Beit habek is located in the Beteiha nature reserve. The El Araj Excavation Project is a joint project of the Kinneret Institute for Galilee Archeology of Kinneret College and Nyack College. The excavation is supported by the Center for the Study of Ancient Judaism and Christian Origins (CSAJCO), the Museum of the Bible, the Lanier Theological Library Foundation and HaDavar Yeshiva (HK).