Built in 1889 as a wooden barge, the Keuka changed hands in 1928 and was soon transformed into a floating dance hall with live music and a bar.

And the man who kept the booze going was none other than notorious mobster Al Capone, according to local lore.

But bad luck followed the Keuka – her manager was shot dead by a drunk patron, and the ship mysteriously sank in August 1932. 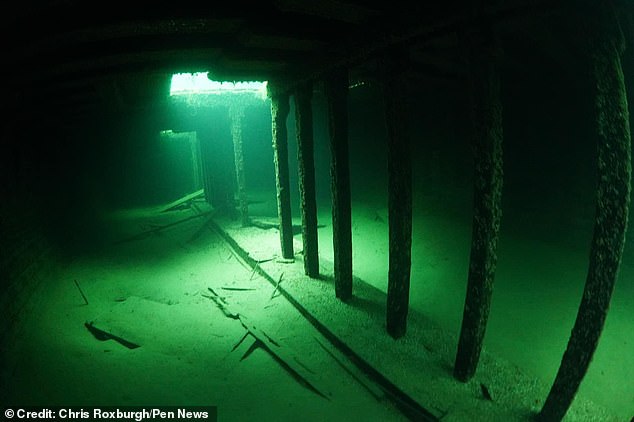 Built in 1889 as a wooden barge, the Keuka changed hands in 1928 and was soon transformed into a floating dance hall with live music and a bar

The Prohibition era began in 1920 when the 18th Amendment to the US Constitution, which banned the manufacture, transportation, and sale of intoxicating liquor, went into effect with the passage of the Volstead Act.

Despite the new legislation, the ban was difficult to enforce.

The rise of the illegal production and sale of liquor (known as “bootlegging”), the proliferation of speakeasies (illegal drinking establishments), and the concomitant rise in gang violence and organized crime led to dwindling support for Prohibition by the late 1920s.

In early 1933, Congress passed a resolution proposing a 21st Amendment to repeal the 18th.

The 21st Amendment was ratified on December 5, 1933, ending Prohibition.

Now the wreck has been revealed in eerie new images.

Chris Roxburgh documented the vessel beneath the surface of Lake Charlevoix, Michigan during a visit with dive buddy Lee Rosenberg.

He said: “My belief and local lore is that Capone and his men supplied this casino ship while it was in operation during the Prohibition Era of 1929-1932.

‘Capone had a house near Charlevoix and people claim to have seen him in those years. He had several “hideouts in northern Michigan” – an easy drive from Chicago.

“The rumor is that after the manager on board was shot, the ship was sunk by a local church group who were fed up with the devil parties, the alcohol, the music, the drinks and the women.”

He continued, “Diveing ​​this wreck makes me think back to 1929, when the parties and gambling were heavy and the alcohol flowed like a river.

“Down inside the ship there are long open areas as the ship is 200 feet long and over two stories high.

“The wreck is intact and upright with good lighting and very clear water. It lurks eerily beneath the surface and has many stories to tell.”

The ship’s reputation as a speakeasy was well established. 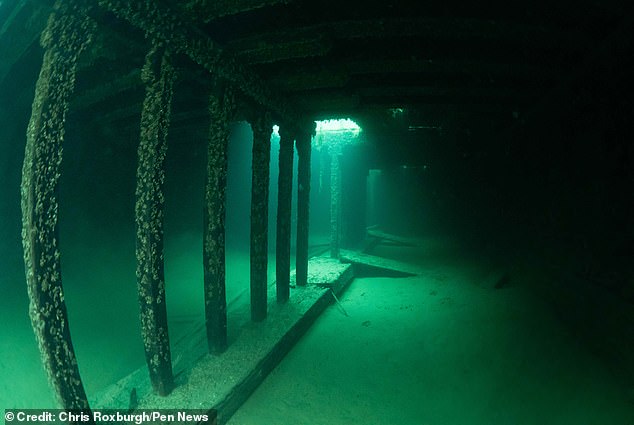 Chris Roxburgh documented the vessel beneath the surface of Lake Charlevoix, Michigan during a visit with dive buddy Lee Rosenberg 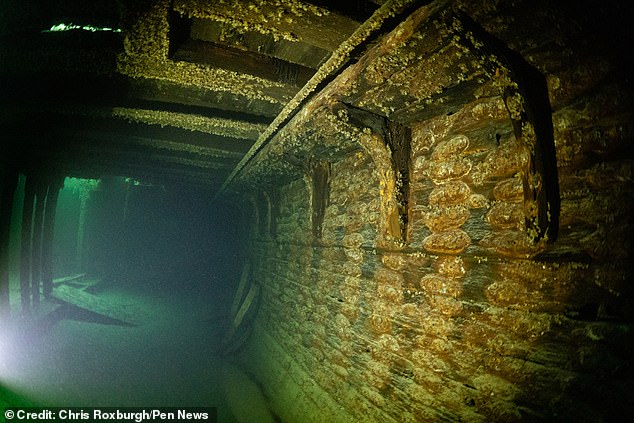 The ship was “one of those places where everybody knew you could have a drink” during Prohibition, reports the Michigan newspaper Northern Express

It was “one of those places everyone knew you could have a drink during Prohibition,” reports the Northern Express, a Michigan newspaper.

And from the middle of Lake Charlevoix, she kept a close eye on every approach and prevented surprises from the police.

“I would imagine someone was getting paid – everyone could hear and see the parties from the shore,” Mr Roxburgh said.

But things were anything but smooth for Keuka. 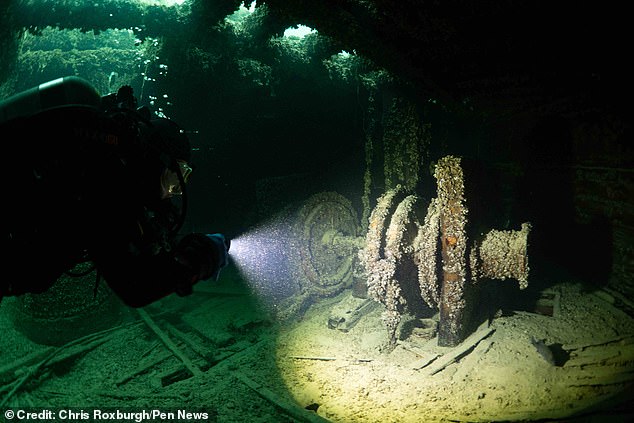 From the middle of Lake Charlevoix, the ship had a vantage point at each approach to avoid surprises from the police 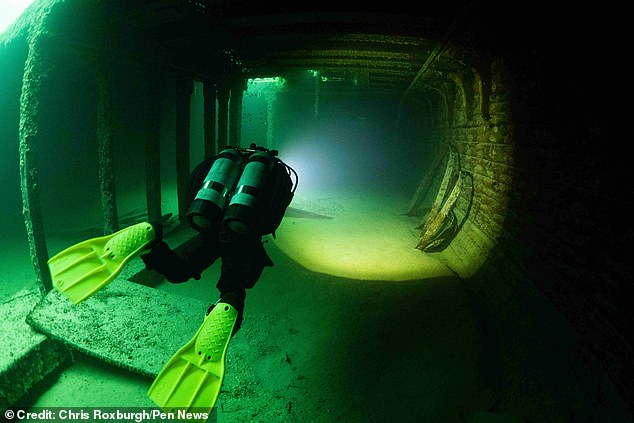 The ship was old and so dilapidated that it reportedly had to be pumped out daily, with a man hired for the job who was said to be paid in whiskey

She was old and so run-down that she reportedly had to be pumped out daily, with a man hired for the job who was said to be paid in whiskey.

Then, on New Year’s Day 1931, a story broke that sealed their fate.

Ed Latham, the barge’s manager, was shot by a drunk customer, said The Boyne Citizen, a newspaper based in Boyne City on the southeast shore of the lake.

The fate of the shooter and his victim is unclear, but reportedly it prompted Captain JH Gallagher to close shop.

The Keuka sank the next year. 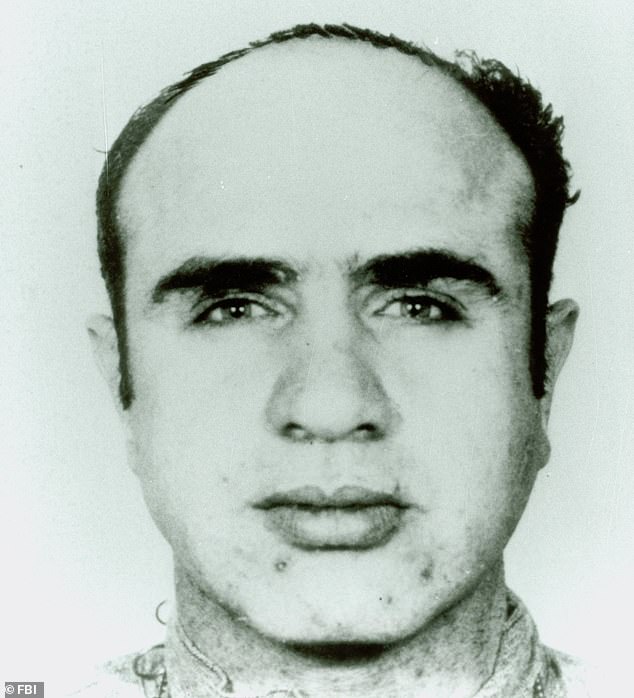 Alphonse Capone (pictured in his 1939 mugshot) is perhaps the most famous, or notorious, gangster in American history

A contemporary account of the sinking, cited by the Northern Express, could find no explanation as to how it happened.

It said: “The Keuka sailed safely on Saturday with no sign of being found at the bottom of the lake a few hours later.

“Nevertheless, something happened and the boat went down.

“There was a reason for the changed terms, but at this time the reason is undetermined and subject to conjecture by the public.”

Today, Keuka lies at a depth of 50 feet not far from the town of Charlevoix.

Al Capone: The most notorious gangster in American history 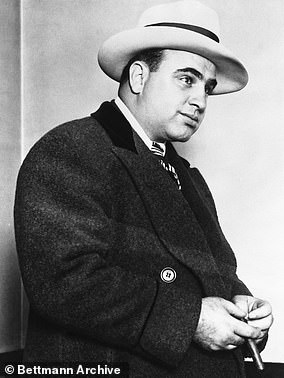 Alphonse Capone is perhaps the most famous or infamous gangster in American history.

Capone grew up in New York City and was active in the Five Points Gang, a Manhattan crime operation of mostly younger Italian-Americans that also completed such well-known gangsters as Charlie “Lucky” Luciano and Johnny Torrio.

In New York, Capone suffered a facial wound in a brawl in a brothel, earning him the nickname “Scarface”.

The escalation of mob violence in Chicago culminated in the Valentine’s Day Massacre on February 14, 1929.

Although Capone was at his vacation home near Miami at the time of the massacre and was never arrested for the crime, he was widely suspected of ordering the massacre.

The Valentine’s Day massacre occurred just a month before Capone was arrested by federal agents for contempt of court for failing to respond to a federal subpoena, and he was eventually sentenced to six months on those charges.

But before he could serve his time for contempt, Capone and his bodyguard were arrested in Philadelphia for carrying concealed weapons. Capone was sentenced to one year in Eastern State Penitentiary in Pennsylvania.

He served nine months, earned time off for good behavior, and was released in March 1930.

On October 18, 1931, Capone was convicted of tax evasion and sentenced to 11 years in federal prison.

Capone was infected with syphilis, a sexually transmitted disease that was incurable in advanced cases.

By the time he left Alcatraz in 1939, the illness had severely affected his mental and physical health. Doctors reported that in 1939 Capone had the cognitive processes of a 12-year-old child.

He essentially retired with his family to his Florida mansion, where he died in 1947 at the age of 48.