There is one area where dealing with Africa sounds fairer and that is music. There is no doubt that African composers and performers have much to say to their Western peers and an open ear for other chords. On the shores of every sea there are conservatory and intuitive finger-trained performers, improvising virtuoso apprentices, and music scholars, and none of these avenues are exclusive to the practice of the craft.

The members of the Belgian collective Mâäk, who make jazz and thrive on merging with African rhythms, know this and teach what they master as instrumentalists wherever they go; International organizations like Playing for Change are working to establish music schools on different continents and to create traditional singing festivals like Zamane in M’hamid (Morocco). It is also witnessed by local clubs such as Les étoiles de Sidi Moumen (The Stars of Sidi Moumen) who, for example, have venues in popular neighborhoods of several Moroccan cities. Stars like Ahmed Soultan, who went to the recently inaugurated Agadir headquarters a few years ago to teach fans the basics of hip-hop, music which he says “can be made with the minimal investment in a computer .

In Muslim-majority countries, brass instruments are generally not cultivated, although other, more traditional ones such as wooden flutes and other materials have always existed.

Africa is synonymous with making music

In every corner of Africa, rural or urban, there is at any given time a group – formally summoned or spontaneous – of people learning to play an instrument, sing or mix on a disc jockey’s tablet. So, on a bright autumn Saturday morning in Rabat, as part of the Jazz au Chellah gathering, we attended a master class (or theoretical-practical workshop) on bronzes – brass instruments – with the saxophonist Toine Thys and the Belgian- Moroccan singer Laïla Amezian. There, melodies are played, harmonized, ethnographic and formative experiences are told or advice is given and received. It is perhaps one of those spaces that function as sanctuaries anywhere in the world, where participants feel like partners and are collectively safe from all the other frictions and hardships of time, borders and the time market. 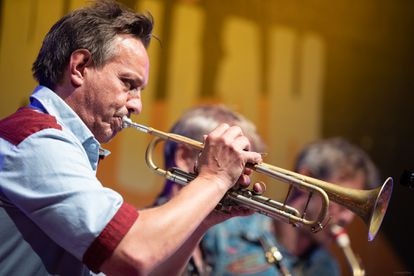 In the master class, one of the first games that Blondiau – leader of the Mâäk Quintet – proposes is to look for a note by ear: he plays it with the trumpet, the wind players try to find it by playing their instruments, and that Singers try to imitate it with their voices. . The game isn’t just about getting it right, it’s also about learning from what’s not right, because in this search for more up and more down, there is “an awareness” that every musician Toine Thys explains.

A dozen boys and girls pay attention to the instructions and take turns asking: What is the best way to change chords fluently in brass instruments? “You have to work the twelve shades in a balanced way,” replies Blondiau, who proposes a different game: limit what comes out and use what is most difficult for them. “What costs African musicians the most is the harmonies, because their music is more rhythmic,” says Thys, who now accompanies Blondiau on some of his educational trips across the continent.

25 years ago, Blondiau founded the Mâäk collective in Brussels with a group of European musicians interested in the music of Mali, the Democratic Republic of the Congo, Burkina Faso and the Maghreb. “The trumpet is a portable instrument,” he jokes, “so from 1998 I started coming to Africa and meeting with musicians from the continent.” These appointments became more frequent and turned into sustainable projects, for example through cooperation with a music school in Ouagadougou in Burkina Faso, where Belgians regularly teach. In other cases, such as in Benin, where they typically work with a family incorporating music into voodoo sacralization practices, the sessions are more informal. “If something in Africa moves me, then it’s the percussion ensembles of the voodoo rites in Benin,” explains the trumpeter.

Blondiau also uses these sessions as an apprentice to practice rhythmic instruments which, although they seem more rudimentary, ‘you have to learn how to play them’. In fact, he notes that when he first heard a group of Beninese drummers, he didn’t understand anything: “I didn’t understand how they were organized, but then I found out”. He’s already learned to play the distinctive West African gong and bells, is ready to attend a dance or wedding band in Benin, and already knows how to clap almost like any other Moroccan gnawa player.

What costs African musicians the most is the harmonies because their music is more rhythmic.

In the role of teacher, the Belgian jazz musician admits that performers without classical training have more plasticity when it comes to adapting to each execution, although on the contrary “they need some theory and names”. Learning theory is key for those wanting to explore brass, since in Africa they were only played in Christian churches, from where their sound needs to be extended further into the streets and popular music. On the other hand, in Muslim-majority countries, brass instruments were not generally cultivated, although there have always been other traditional ones, such as wooden flutes and other materials.

What’s the hardest thing to teach about music in Africa? we asked him. “Have a longer-term vision, away from impatience and immediacy, as you need a lot of practice before you get results,” the instrumentalist and composer emphasizes. And he adds that “short-term vision doesn’t work in music,” which is certainly a normal way of working for much of the continent’s cultural activity.

At the end of the workshop, an actor asks the jazz musicians about improvisation, which according to his criteria in the theater consists in taking over a story in order to take on the task of adding elements that give it continuity. Someone replies that something similar happens in jazz, which many see as a process rather than finished music. “Everything is jazz,” teachers and students agree with a smile as they continue to swap roles.