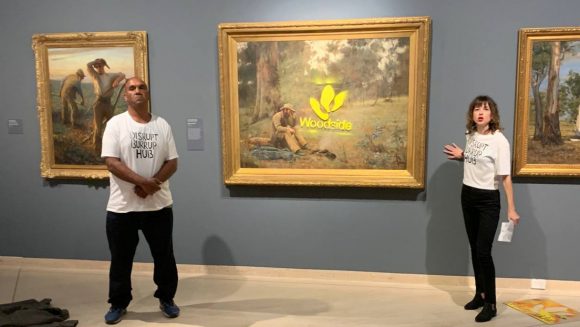 Act of vandalism for the benefit of rock art and the environment. Photo: Facebook/Disrupt Burrup Hub.

Two indigenous rights activists spray-painted an oil and gas company logo on Fredrick McCubbin’s painting Down on His Luck, on display at the Art Gallery of Western Australia in Perth.

An activist identified as Joana Partyk was captured this Thursday pasting a template of the Woodside company logo onto the prized artwork three millions of dollars and sprayed them with aerosol.

After the vandalism, Desmond Blurton, an activist from Ballardong Noongar, an Indigenous people in the Australian city of Perth, unfurled an Indigenous flag and placed it on the ground in front of the painting.

They reported it from the gallery The artwork was not damagedsince it was covered with a protective piece of Plexiglas, a synthetic substance that looks like glass.

According to the protesters With this protest they demand that ancient rock paintings and the environment be respected destroyed by Woodside’s liquefied natural gas exploitation on the Burrup Peninsula, emitting millions of tons of carbon dioxide and threatening the region’s Indigenous culture.

“This painting is barely 100 years old, we have 50,000 year old artwork that Woodside is destroying.”Blurton said.

The iconic Australian painting Down on His Luck was spraypainted by activists at the Art Gallery of WA.