There is a disturbing fact: there are more bacterial cells (38 trillion) in the human body than human cells (30 trillion). One of the priests of microbiology, the American Frederic Bushman, even urges us to no longer see man as an individual organism, but rather to see him as a coral reef inhabited by billions of other creatures. A macro study now shows that these tiny tenants jump from one person to another in enormous proportions: two roommates share 12% of the strains in their gut and up to 32% in their mouth, including bacteria linked to problems like cancer, obesity , diabetes and cardiovascular disease, according to the study’s lead author, Spanish microbiologist Mireia Vallès. Some diseases that were historically considered non-communicable have an infectious component. “It’s a paradigm shift,” declares Vallès.

The new study analyzed stool and saliva samples from about 5,000 people from 20 countries on five continents. The results confirm that social interactions also determine the composition of the so-called microbiome in the gut. A mother shares 34% of the bacterial strains in her gut with her young children. Two people live together, 12%. Two twin brothers living in different houses, 8%. And two unrelated adults from the same city also 8%. Inherited microorganisms are lost after birth: coexistence shapes the microbiome. “The percentage an adult shares with their mother is the same as the percentage they share with people they live with or with work colleagues,” says Vallès of the University of Trento in Italy.

Three out of four deaths worldwide are caused by so-called non-communicable diseases such as cancer, heart attacks, strokes, diabetes and asthma. According to the World Health Organization, more than 40 million people worldwide die from these causes every year. Canadian microbiologist Brett Finlay put forward a provocative hypothesis three years ago. “Are non-communicable diseases communicable?” asked Science magazine. Finlay argued that factors such as junk food, smoking, and alcohol consumption cause imbalances in the microbiome that can affect NCDs or their risk factors, such as obesity. This altered microbiome “could be transmitted from person to person and potentially contribute to the spread of disease,” according to Finlay.

The new work points in the same direction. “Our results reinforce the hypothesis that several diseases and conditions currently considered non-communicable should be re-evaluated,” the authors say in their study, published this Wednesday in the journal Nature, the pinnacle of the world’s best science . It is the largest study to date on the transmission of the human microbiome.

The signatories looked at more than 800 species of bacteria and identified each individual’s ultra-specific strains. “Sharing 8% is a lot, because if we haven’t had contact with them, we have zero,” emphasizes Vallès, who was born in Vic (Barcelona) 32 years ago. Their study confirms that the microbiome is transmitted differently in the mouth than in the depths of the digestive tract. “In the oral route, saliva is the vehicle, but we don’t yet know the specific mechanism of the gut. It could be due to poor hygiene, faecal-oral transmission that later enters the gut, but it’s not clear,” admits the microbiologist. 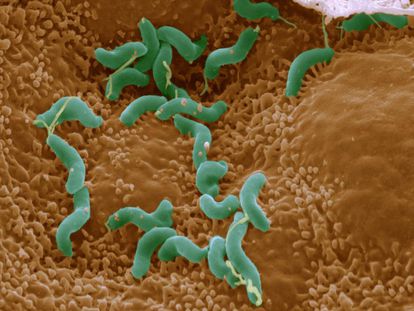 Color image of the bacterium “Helicobacter pylori” under the microscope.

Researchers from a dozen countries took part in the macro study, including agronomist María Carmen Collado from the Institute of Agrochemistry and Food Technology of the CSIC in Paterna (Valencia). Collado is a specialist in the so-called vertical transmission of the microbiome from mothers to children. “Now we have seen that horizontal transmission from person to person is very important, much more important than originally thought,” he points out.

The microbiome is in the scientific spotlight. Three months ago, a team from Yale University (USA) announced that a microorganism common in the human gut is suspected of playing an important role in the development of colorectal cancer, the second deadliest tumor in the world. Some strains of this bacterium, called Morganella morganii, produce molecules that are toxic to human DNA and which, when injected into mice, cause tumors. Another common bacterium in the stomach, Helicobacter pylori, has been linked to an increased risk of stomach cancer.

Mireia Vallès’ team has identified some microbes that are transmitted more strongly than others. Many don’t even have names, despite their obvious importance, the scientist said. “What surprises us in general is that there are some bacteria that we know very little about, that have never been cultured and that rank high. [de microbios compartidos]’ Valles warns. His group has turned to metagenomics, the large-scale analysis of all genetic material in stool and saliva samples.

Microbiologist Brett Finlay, a pioneer of the hypothesis, welcomes the new research, in which he was not involved. “It’s a fascinating study that feeds on what I raised myself: that noncommunicable diseases are potentially transmissible through the microbiome,” says this researcher from the University of British Columbia in Canada. “These results really reinforce the concept that you can ingest potentially harmful microbes [causantes de enfermedades] by other people in a transferrable manner. This prompts us to reconsider policy on noncommunicable diseases, which currently account for the largest share of morbidity and mortality worldwide,” argues Finlay. “Choose your partners well,” he jokes.